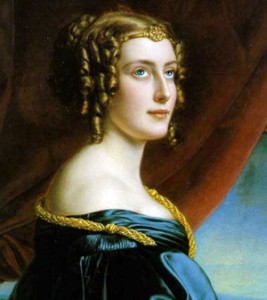 On This Deity today proudly presents a love story of lust and adventure; the story of Jane Elizabeth Digby, who died on this day in 1881; a woman who did her own thing, when doing one’s own thing was very much not what women did.

During the course of her lifetime, today’s average British woman will have sexual contact with an average of 14.5 men. Women weren’t always so free to enjoy their sexuality. It was women like Jane who paved the way for her late 20th, early 21st century Sisters.

Jane Digby was born with a silver spoon in her mouth in 1807. Her father, an Admiral, had made the family pile commandeering Spanish treasure. Jane was a stunner and the fact that her daddy was loaded made her an extremely desirable marriage prospect. Aged just 17 she was married off to Lord Ellenborough, a man twice her age.

They had a son but he died as an infant. He was the first of Jane’s five children by four different fathers; only two of her children would survive to adulthood.

Jane and Lord Ellenborough divorced in 1830 after he had an affair – an outrageous scandal at the time. Like many women today Jane enjoyed sleeping around, looking for a partner to satisfy her physically as well as emotionally. In a buttoned-up society ruled by duty and dos-and-don’t, her promiscuity became infamous. Her celebrity affairs with the rich and famous across Europe meant she was rarely out of the papers. Today, that good-looking girls in the public eye have affairs with footballers, princes and film stars is quite normal. Jane’s many lovers and husbands make Zsa Zsa Gabor look like a part-timer. Jane’s lovers and four husbands included a Greek king, an Austrian statesman, a Bavarian king, a Bavarian baron, an Albanian general.

It wasn’t until she was into her very late 40s she finally found what she was looking for in the form of a Syrian bedouin sheik 20 years her junior. Medjul El-Mesrab was the love of her life. He lived a traditional tribal, nomadic life, and Jane delighted in sharing it with him as his one and only wife. They trekked through the desert in the winter, bivouacking at the ancient ruins of Palmyra, and spending summers in the shade of her house in Damascus.

But Jane shouldn’t be remembered for her high-class shags. She was an expert horsewoman and stock breeder; an archaeologist; a cameleteer; a falconer; a gifted linguist – she spoke and read nine languages. She could draw and paint, had considerable veterinary knowledge, was a fearless traveller, an eloquent writer and most of all, a woman with spirit.

It was women like Jane who unknowingly paved the way for modern women to both do their own thing and enjoy their sexuality. Aged 73 a year before she died, Jane still had her mojo; she wrote in her diary: “It is now a month and 20 days since Medjul last slept with me! What can be the reasons?”

It wasn’t until the contraceptive pill became widely available in the 1960s that women could freely express their sexuality without the very real fear of pregnancy. The pill gave women reproductive choice, a luxury denied to Jane.

Jane died of dysentery aged 74. She and Medjul had been married 28 happy, faithful years. Medjul was heartbroken. He took a block of pink limestone from Palmyra, carried it back to Damascus, carved an inscription on it and lay it on her grave. When I visited the unkempt, neglected protestant cemetery in Damascus, Jane’s grave was covered in rubbish and leaves. The small boy who had come to unlock the cemetery gates to let us in found a hose and washed the grave down until the limestone block sparkled pink again.

Jane’s life story is such a bodice-ripping yarn, I cannot understand how Hollywood hasn’t made a film about it. I see Nicole Kidman in the starring role.