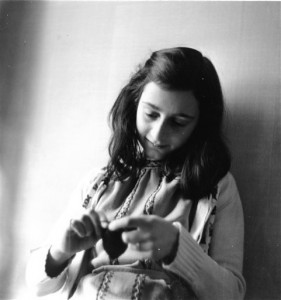 Today is the date attributed to the death of Anne Frank. But the exact date is of course unknown, for the 15-year-old Jewish diarist was just one of some 18,000 to die from the typhus epidemic that spread like wildfire through Bergen-Belsen during March 1945, as the overcrowded concentration camp struggled to cope with the influx of Jewish prisoners from the east in the face of the Soviet advance. And as the Nazi war machine collapsed, its infamous and obsessive record-keeping gave way to disorder. So, all that is known for certain about the death of Anne Frank is that it was sometime around this date, her body thrown into a mass grave. For two years, she and her family evaded extermination hidden in the Secret Annex. Following their capture and arrest, she evaded the human infernos of Auschwitz before being relocated to Bergen-Belsen. But by March 1945, Anne Frank had finally lost that unsullied hope that would someday inspire millions. Her mother had remained in Auschwitz, where she died of starvation. Just weeks earlier, her sister Margot died of dysentery in front of Anne’s eyes. Unaware that her father was still alive, and so without anything left to live for, Anne threw off her lice- and flea-ridden prison garb, wrapped her emaciated naked body in a blanket, and died alone. Just three weeks later, on 15th April 1945, the British liberated Bergen-Belsen.

Anne Frank is one of the most enduring figures to emerge from the Nazi Holocaust. Her poignant account of the greatest evil imaginable revealed a gifted writer and profound thinker who humanised the inhumane. From beyond that unidentified mass grave near Bergen-Belsen, she became one of the most powerful voices of the twentieth century. And so, while we regrettably cannot know the exact date of her heartbreaking demise, let us nevertheless take this opportunity to remember and salute her.