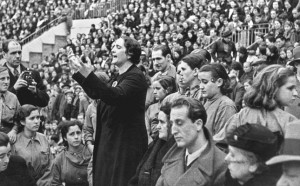 La Pasionaria: “They shall not pass!”

Today we recall the “Spanish Joan of Arc”, Dolores Ibárruri – better known the world over by her revolutionary name, La Pasionaria (the Passion Flower) – who died on this day in 1989 aged 93. Dolores Ibárruri achieved meteoric fame when she took to the radio – soon after the outbreak of the Spanish Civil War in July 1936 – declaring: “No pasarán!” (They shall not pass!) This impassioned warning to General Francisco Franco’s Nationalists became the Republican battle cry, and La Pasionaria was thereafter thrust into the role of chief propagandist for the Spanish Communist Party, whom she’d joined from its 1921 inception. Whether she was addressing a mass public meeting or speaking on the radio, Ibárruri’s resonant voice and emotive phrases exerted a spellbinding effect on her audiences. “It is better to die on your feet than to live on your knees,” she famously exclaimed. And under La Pasionaria’s infectious zeal, for a while at least, the multi-faceted movements of the Republican Left united in the war against Franco’s Nationalists.

Arguably the most famous Spanish woman of the twentieth century, Dolores Ibárruri was also one of the few female Communists to enjoy such a high profile position. But while her great success as La Pasionaria was in no small part due to her own considerable abilities as a writer, agitator and orator, it is also true that her reputation owed much to the Communists’ decision to promote her as an iconic symbol of the Republican cause. Dressed always demurely and entirely in black, her hair modestly fastened in a bun, La Pasionaria’s public image transformed her into a legendary figure as Proud Mother of the Republic, courageously confronting the horror of Fascist aggression. Her bravery made her radiant, and – projected worldwide through revolutionary photos and posters – she became an iconic symbol of the Spanish Republic’s courage as it stood alone and abandoned by the Western Powers in the face of Fascist aggression.

Although La Pasionaria’s politics rarely deviated from the official Soviet line, during the Civil War she went farther than most Communists in championing women’s rights. Indeed, she was almost alone in the Spanish Communist Party hierarchy in demanding parity with men and that women’s economic and political emancipation should be a primary goal of the Communist movement. Unfortunately, however, her religious-like devotion to Marxism and the Soviet Union led her – during the Spanish Civil War – to support many reprehensible policies, especially the ruthless persecution of former comrades, the anti-Stalinist Communists POUM and the Anarcho-Syndicalists of CNT.

And as the Republican resistance turned in on itself and crumbled, La Pasionaria fled Spain for Moscow where she lived in exile until two years after Franco’s death in 1975. Visitors to her Russian apartment have remarked on the surprising austerity of the accommodation provided for such an internationally renowned Communist. Her Marxist beliefs never wavered, however. And her triumphant homecoming after the death of Franco was followed by her taking her place as an MP in the new government: the Spanish Communist Party’s sole representative in Spain’s first free elections since 1936. But for all of her great legacy, much of what La Pasionaria had known and long fought for was by the late 1980s in an advanced state of collapse. So it’s perhaps with a poetic flair so typical of La Pasionaria that this great orator quit the planet just three days after the collapse of the Berlin Wall.