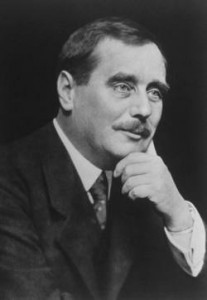 Today we celebrate the social reformer, prophet and science fiction writer, H. G. Wells, who died on this day aged 79. Probably best remembered for his visionary novels The Invisible Man and The War of the Worlds, and for his uncannily prescient predictions of tank warfare a decade before the start of World War One and the nuclear bomb two full decades before World War Two, it is, however, in his role as a radical social reformer and utopian visionary that I have chosen to commemorate Wells’ place in history. For it is in his 1928 essay The Open Conspiracy that we see the agility of Wells’ mind most usefully expressed; and usefulness is surely what we all need most as we careen rudderless towards global catastrophe. The Open Conspiracy was a futuristic blueprint in which Wells called for a revolution of advanced minds who could “adjust our dislocated world” not through the falsely-imposed and mind-shackling bonds of nationalism, but through adopting an inclusive worldview helpful to and necessary for all of humanity.

Watching in horror at the tyrannical manner in which Mussolini and Hitler had co-opted and misappropriated socialism on behalf of their own rampant nationalism, Wells predicted that such inward-looking policies could only bring the world to an end. For the leaders of the world’s wealthy countries – believing it acceptable to act only on behalf of their own people – could then choose to ignore the fate of the wider world, which would now lay far beyond the restricted interests of their (often hard-won) national boundaries. What was needed, Wells concluded in The Open Conspiracy, was a group of advanced world individuals, forward-thinkers whom Wells defined as understanding the need for social reform in order to stop the world’s descent into chaos.  According to Wells, these conspirators would be intellectually responsible for fostering a revolution to avert the physical destruction of the earth and organise a new world order. He wrote:

‘It amounted to a protest, first mental and then practical; it amounted to a sort of unpremeditated and unorganised conspiracy, against the fragmentary and insufficient governments and the wide-spread greed, appropriation, clumsiness, and waste that are now going on. But unlike conspiracies in general this widening protest and conspiracy against established things would, by its very nature, go on in the daylight … It would, in fact, become an ‘Open Conspiracy,’ a necessary, naturally evolved conspiracy, to adjust our dislocated world.’

Wells died in 1946 – one year after the end of WWII and before the Cold War; his propositions for an Open Conspiracy and A New World Order were consequently tainted by the spectacular failures of socialist experiments. But it’s doubtful even in the wake of these failures Wells would have revised his blueprints. He’d acknowledged that mistakes would be made on the road to utopia, but maintained that the day would come when a global government would be our only choice; when the threat to humanity was so great that such governing would have to be implemented, by force if necessary, for the greater good of all. The failure of our nation states to take necessary and urgent action to avert the problems ahead would suggest that Wells might have been right.