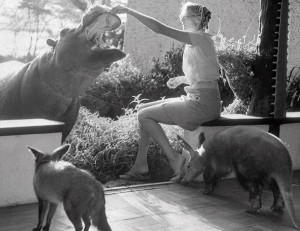 Joan Root and friends: a fox, a hippo and an aardvark. (Photo by Alan Root)

On this day in 2006, 69-year-old Joan Root lay alone bleeding to death from gunshot wounds at her home on the shores of Lake Naivasha in Kenya.

Whodunnit? Who cut down this Kenyan-born English rose? And why?

As a young woman, Joan was shy and quiet, but spirited, fearless and utterly enchanted by Africa. In 1961 she married Alan Root who had been especially impressed by her care for an orphaned baby elephant. Together the Roots pioneered wildlife film-making, taking extraordinary risks to get astonishing and detailed footage of animal behaviour. They used an amphibious car to get close ups of crocodiles, set up cameras in a hornbill’s nest, and flew in a hot air balloon to track the great herds migrating across East Africa’s untamed landscapes. Daredevil Joan narrowly escaped death while filming hippos underwater when a hippo bit through her mask. Their bold and dramatic films were narrated by Hollywood A-list stars and nominated for Oscars.

After she and Alan divorced, Joan stayed on with a few staff at her beloved Naivasha farm to devote her time to her menagerie of orphaned or injured animals. Joan had been conceived and born at Naivasha, it was her home. She would die trying to conserve it.

Unlike many of Africa’s Great Rift Valley lakes Naivasha is not a soda lake. Its fresh waters supported complex ecosystems with hundreds of species of birds, thousands of large and small mammals, and fish teeming in its shimmering waters.

But Joan noticed a dramatic reduction in the numbers and size of fish being landed by locals who’d relied for centuries on this natural bounty to feed their families. Fish were now being harvested in bulk using narrow-mesh nets. Result: too many undersized fish were landed and the fish population could not sustain itself. Equally worryingly, she observed that the lake’s water level and water quality had began to deteriorate at precisely the same time as the establishment of the flower farms on the lakeshores.

Flower farms. Oh! how charming, how bucolic! Make no mistake, this is a savage, cut-throat business run by greedheads mired in corruption who give not one flying fuck about the health of their toiling workers or the collapse of the ecosystem. No. Instead, they bought up thousands of acres of prime virgin lakeside bush and cleared subsistence smallholdings to make way for hundreds and hundreds of mega-polytunnels in which roses, carnations and other blooms are industrially propagated. They are grown, sprayed, harvested and packed using cheap local labour and flown out of Nairobi, which is just a couple of hours drive away, to reach lucrative European markets within a day.

Horrified by the exploitation of the fisheries and the extraction and pollution of water, Joan began campaigning to conserve the Naivasha ecosystem. She helped to establish a ‘task force’ of staff, who she paid out of her own pocket, to tackle the fish poachers. She became the thorn in the side of powerful corporate flower farmers and quickly made lots of ruthless enemies who saw Joan as a threat to their profits.

The task force had some early successes, but the behaviour of some of its staff was its downfall and it all went horribly wrong. Legitimate subsistence fishermen were beaten up. Corruption and power games perhaps with disgruntled ex-employees lead to serious threats: Joan was harassed and despite death threats she refused to leave her home. We should expect no less of a woman whose husband once said of her “she handled dangerous snakes as easily as kitchen utensils.”

But people are far more dangerous than snakes.

Joan’s murder is widely believed to have been a contract killing, but the questions of both who fired the shots and who paid for the assassins remain unanswered. And with so many enemies, with corruption within the police force and government, with so many economic interests to protect, there is unlikely to ever be justice for Joan.

Joan’s story provokes disturbing questions about what is ‘progress’ in the developing world, about ethical business and ethical consumerism, about institutionalised corruption, and about global over-population and pressure on dwindling resources. The population in Naivasha has grown from 50,000 in 1985 to more than 200,000 today. What will happen to these people once the flower industry has exhausted the lake’s resources?

I was at Naivasha in 2010. Quite apart from the chemical-filled yellow water in which a pathetically tiny hippo population tried to survive; quite apart from the over-crowded slum conditions of the flower farm workers which reminded me of Victorian mill-towns, the thing that shocked me most from when I’d visited ten years earlier was the water level of the lake. Using the vegetation as a guide, I calculated that the level has dropped by four metres in the past decade. I was disturbed to see some guys dismantling a wooden jetty which was now left high and dry about 100 metres from the current lakeshore. They obviously don’t anticipate the waters rising again any time soon…

So next time you reach for cheap flowers at the supermarket or petrol station, be sure they are not Kenyan and spare a thought for Lake Naivasha: the thousands of exploited workers, the dying fish, the poisoned waters, the creatures of the surrounding bush who cannot now reach the lake to drink because of polytunnels full of thirsty roses … and remember Joan Root’s blood, shed trying to save Naivasha. This can be the only justice for Joan.