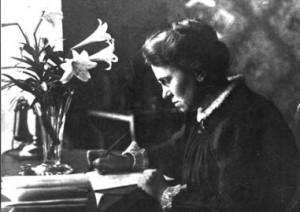 The one and only Emma Goldman

Today we celebrate the extraordinary life of an extraordinary woman – orator, writer, agitator, firebrand and revolutionary anarchist – Emma Goldman. Known as “Red Emma,” “the mother of anarchy in America” and “the most dangerous woman in the world,” she was the most prominent and notorious radical of her day – an incendiary voice of dissent who unwittingly inspired President William McKinley’s assassin. But her message was “dangerous” only to the Establishment. For five decades, this feisty, ornery, vivacious Russian Jewess struggled tirelessly and relentlessly against inequality, repression and exploitation of the world’s have-nots – raising people’s consciousness, transforming their political assumptions and forcing them to ask questions. With passion, boundless energy, chutzpah and a remarkably sustained level of intense focus, Emma Goldman dedicated her life to the ideal of absolute freedom and the creation of a radically new social order.

Galvanised by the events of the 1886 Haymarket bombing in Chicago shortly after her arrival in America, Goldman became a leading voice in the burgeoning anarchist movement. Convinced that the political and economic organisation of modern society was unjust and fundamentally flawed, she embraced the self-governing ideal of anarchism for the vision it offered of liberty, harmony and true social justice:

“I consider Anarchism the most beautiful and practical philosophy that has yet been thought of in its application to individual expression and the relation it establishes between the individual and society. Moreover, I am certain that Anarchism is too vital and too close to human nature ever to die. It is my conviction that dictatorship, whether to the right or to the left, can never work–that it never has worked, and that time will prove this again, as it has been proved before. When the failure of modern dictatorship and authoritarian philosophies becomes more apparent and the realization of failure more general, Anarchism will be vindicated. Considered from this point, a recrudescence of Anarchist ideas in the near future is very probable. When this occurs and takes effect, I believe that humanity will at last leave the maze in which it is now lost and will start on the path to sane living and regeneration through freedom.”

At the forefront of the key struggles in a revolutionary era, Goldman’s life was rich and colourful and, unsurprisingly, filled with ups and downs. She endured constant jeers, relentless harassment from the police, frequent imprisonment and ultimately deportation from America. Nevertheless, she was one of the most powerful and popular public speakers of her time. Throughout her thirty-year residency in the United States, she regularly criss-crossed the country – fervently addressing large crowds on workers’ rights, union organisation, freedom of speech, radical education, atheism, equality and independence for women including the right to birth control and free love. For eleven years she published the anarchist movement’s foremost journal, Mother Earth. She was at the epicentre of some of the turn-of-the-century’s most controversial events: together with her life-comrade Alexander Berkman, they plotted the “propaganda by deed” assassination attempt of wealthy industrialist and Homestead Strike villain Henry Clay Frick; during the Panic of 1893, she incited the starving poor of New York City to steal bread from the rich; and, at the outbreak of World War I, she and Berkman founded the controversial No-Conscription League – which ultimately led to their deportation in 1920 back to Russia.

Devastated to leave America – the land of possibilities that had so inspired her – she nevertheless embraced the opportunity to witness the aftermath of her homeland’s recent revolution. But after two dismal and bitterly disappointing years, she and Berkman fled. Emma would devote the next phase of her life atoning for her support of the Bolsheviks and exposing them as revolutionary traitors.

Thereafter, until her death in 1940, she led a transient life – mainly writing her astonishing 1000-page autobiography, and pining for America. With high hopes she went to Spain to support the anarchists during the civil war but, after enduring yet another revolutionary failure, she wished to get as far away from Europe and as close to America as possible, and made her last home in Toronto. She died there on May 14th following a stroke at the age of 70. In death, she was finally permitted to return to America and is buried near the Haymarket Martyrs.

Emma Goldman was anarchism’s most ardent proponent. The intensity of her convictions and her powerful means of communicating them popularised the ideal as never before or since. An enemy of smug contentment and blind acquiescence, she was a bright and beautiful prophet of personal liberation and self-fulfillment. She struggled, she strove and never gave up the good fight.

Hers was a noble dream, and she is one of my greatest heroines.