15th January 1919  the Murder of Rosa Luxemburg and Karl Liebknecht 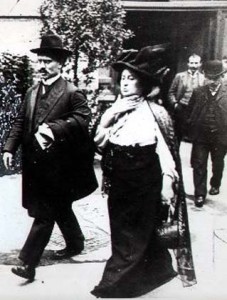 The murder of revolutionary leaders Rosa Luxemburg and Karl Liebknecht on 15th January 1919 at the hands of the proto-Nazi Freikorps marked the end of the Spartacist Week – the failed workers’ uprising in Berlin. Incredibly their murder was ordered by a Socialist (SPD) government. Whilst internecine battles on the Left came to dominate the twentieth century, this betrayal was so shocking not just because it was the first, but because it came from the party widely regarded as the spiritual home of the international Socialist movement.

The SPD was the oldest and largest organisation of its kind in Europe, and the one in which Marx and Engels had been most personally involved. But after years in the political wilderness outlawed by Bismarck’s draconian regime it had evolved in a direction far removed from its revolutionary roots. Although maintaining a large membership and considerable party apparatus it had developed an ideology – the ‘revisionism’ of theorist Edward Bernstein – essentially loyal to the imperial German state whilst maintaining the language of Marxism. In response, a young Jewish woman who had fled from repression in Poland – Rosa Luxemburg – wrote the pamphlet ‘Social Reform or Revolution?’ that summarised the crisis facing the party.

This crisis came to a head in August 1914 when the SPD delegates in parliament shocked the Socialist world by voting to support the Kaiser’s war policy. Socialists in France, England and Russia had pledged to prevent war between their ruling classes, but when put to the test the Socialist 2nd International effectively disintegrated along patriotic lines. Rosa Luxemburg briefly contemplated suicide – but instead split from the SPD, along with Karl Liebknecht and other radicals, to form the Spartacist League.  Another larger group – the USPD or independent Socialists – also broke away adopting a halfway position between the revolutionary Spartacists and the ‘moderates’.

Finally in November 1918 after four years of war, German society crumbled both at the front and at home – the working class took to the streets in a series of strikes, and the navy mutinied.  Naturally they initially turned to the largest and ‘official’ opposition group – the SPD. And when the Kaiser abdicated and the generals tried to prop up the old order by negotiating an armistice, the ruling class sought an alliance with these ‘moderate’ Socialists to avert the threat of a Bolshevik-style revolution. So the SPD found itself thrust into the position of running the country – and two months of revolution and counter-revolution began.

Large-scale strikes and demonstrations continued and the mutineers – organised in the ‘People’s Naval Division’ – refused to be disarmed.  Other demobilised and disaffected soldiers adopted  ultra-nationalism and a hostility to the Left as the ‘betrayers’ of Germany; they organised themselves in Far Right paramilitary groups – the Freikorps. Street violence grew between these groups, with the Socialist leaders now in government actively encouraging the Freikorps to ‘keep order’.

Unable to co-operate with these SPD ‘moderates’, the USPD left the coalition government. Turning on their former comrades, Socialist leaders Ehbert and Noske now backed by the former monarchists and the army high command, openly called for the crushing of the Left organisations – particularly the Spartacist League, which although not uncritical of the Bolsheviks, had been inspired by the Russian Revolution and re-launched itself as the German Communist Party.

On January 5th the government ordered the removal from office of the Berlin police president, a member of the dissident USPD. In response the USPD, the Communists and the shop stewards movement jointly organised a strike and demonstration of 500,000 in the capital. Critically at this point Karl Liebknecht and the Communist leadership called for an insurrection to seize power. Rosa Luxemburg argued against them, claiming such a move was not only premature but also potentially disastrous when the forces of the right were gathering strength. In the end she threw herself in her with her comrades; arguing that events were now in motion and that standing on the sidelines would be a worse mistake than waiting for the right moment. Days later, at Noske’s orders, Luxemburg and Liebknecht were taken prisoner by the Freikorps and summarily executed: Liebknecht’s body was dumped anonymously at the city morgue and Luxemburg’s was found months later in the Landwehr canal.  In Berlin the conflict on the streets continued, but by February the Freikorps had regained control  – 30,000 of them had entered the city and 3,000 workers had been killed.

The consequences of defeat were enormous. In Germany whilst the Communists were to steadily gain support until another unsuccessful revolution in 1923, the Left were bitterly divided. Most importantly the Far Right had been accepted by the weakened ruling class as the maintainers of order and as a bastion against revolution. Over the following years the Freikorps morphed into the Brown-shirts of the Nazi party.

For Europe as a whole, the failure of revolution in the West isolated the Bolshevik regime in the Soviet Union and accelerated its degeneration.  And Rosa Luxemburg’s murder robbed the revolutionary movement of a leader who was developing a Marxism distinct from the Bolshevik model that reflected the different traditions of the western working class movement. Never fully developed, her theory of ‘revolutionary spontaneity’ is still debated amongst Marxists to this day.

After 1945 her memory was ironically appropriated by the Stalinist East German state – a regime she would have detested. Wary of the danger of elevating the role of ‘the party’, she believed unswervingly in the working class’s ability to repeatedly assert its own revolutionary potential – even in the face of defeat. Famously on the evening of her murder, almost certainly knowing that the rising had failed and that she personally faced death, she wrote:

“The leadership has failed. Even so, the leadership can and must be recreated from the masses and out of the masses. The masses are the decisive element, they are the rock on which the final victory of the revolution will be built…Order reigns in Berlin! You stupid henchmen! Your ‘order’ is built on sand. Tomorrow the revolution will already ‘raise itself with a rattle’ and announce with fanfare, to your terror: I was, I am, I shall be!”