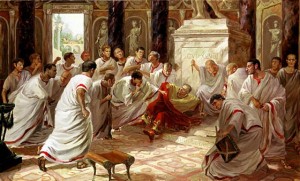 Beware the Ides of March

Today we put our hands together and give a round of applause to the Liberatores, those forty Roman senators who off’d that despicable cad, Julius Caesar – his death foretold (“Beware the Ides of March”) by a soothsayer earlier that same day. In the previous years, Caesar had charged about Europe veni, vidi, vici-ing (I came, I saw, I conquered) and in the process giving his name, like Robin Hood and Oliver Cromwell after him, to ancient monuments throughout Europe’s Atlantic coast where his Roman navy wreaked havoc while Caesar observed from the safety of the shoreline. It was because of Caesar that the Roman Republic became an Empire, thereafter the very name Caesar invoked everything grand and monarchical, inspiring the German Kaiser and the Russian Tsar.

Nothing more need be said about Caesar other than he was the Ur-Tyrant and instigator of the Roman Empire whose blueprint every future empire would be compelled to study.  And even now, over 2000 years after Julius Caesar’s inadvertent creation, still we remain entirely in thrall to its unfathomably long tentacles. Yes, the Empire is long dead  – but its strictures, its totalitarianism, its demand for absolute obedience, all are still mirrored through the everyday behaviour of the Roman Empire’s psychic wing – the Roman Catholic church.