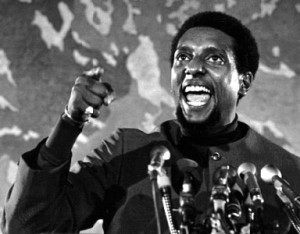 Stokely Carmichael: Ready for the Revolution!

Today we honour revolutionary civil rights leader Stokely Carmichael, who died from cancer on this day aged 57. In June 1966, Carmichael was catapulted to worldwide fame overnight when, at a high-profile rally organised by Martin Luther King, Jr., he took to the podium and – with his fist in the air – shouted: “We been saying ‘freedom’ for six years and we ain’t got nothin’. What we gonna start saying now is ‘BLACK POWER!’” Although Carmichael did not originate the phrase, he undeniably popularised it; when the New York Times reported his speech on its front page the following day, “Black Power” instantly became a part of the national vocabulary – polarising the civil rights movement, striking terror into much of White America and thrusting Carmichael into the limelight as the ’60s most militant and radical black leader. One of the original anti-segregation Freedom Riders and chairman of the Student Non-Violent Co-ordinating Committee (SNCC), Carmichael endured 27 arrests before rejecting Martin Luther King, Jr.’s policies of non-violence and integration. Taking inspiration instead from Malcolm X, Carmichael’s Black Power crusade demanded more than just civil rights and integration into the mainstream of white American society… it demanded a separate identity and genuine political power for and on behalf of black Americans. Black Power captured, indeed defined the zeitgeist of the late 1960s and Stokely Carmichael’s immense contribution to African American self-identity cannot be overestimated.

A brilliant and fiery orator, famously described as “appearing to strut when he was standing still”, Carmichael was ousted from SNCC when his rhetoric became too radical. He next accepted an invitation to join the newly formed Black Panther Party for Self-Defence as their ‘honorary prime minister’ and, for a while, Carmichael’s uncompromising militancy fit well with the Panthers’ urban guerrilla tactics and anti-imperial ideologies – Carmichael having already denounced the Vietnam War as America’s imperialist attempt to subjugate a Third World people. But he soon proved to be too radical even for the ultra-radical Panthers, and disassociated himself from the BPP after they altered their strict separatist strategy to form alliances with white activists. Like W.E.B. Du Bois before him, Carmichael became disenchanted with the civil rights movement and thereafter redirected his energies to Pan-Africanism. In 1969, he moved to Guinea-Conakry in Africa and changed his name to Kwame Ture in honour of the two African leaders who became his patrons.

But even in self-imposed exile, Stokely Carmichael never relinquished his dream for complete black reform, devoting the rest of his life to an explicitly socialist Pan-African vision. More than any other black leader of the 1960s, he retained his militant stance and – despite the many advances in American and worldwide civil rights – maintained these rights were largely superficial and in no way enough. “Many of you have already accepted their laurels and do not even pretend to see the need for further reforms,” he wrote in 1988 to a former SNCC colleague. “For them the ’60s put everything in place and they did it. Well, I still see Revolution and continue to work for it.”

Indeed, until his death, Stokely Carmichael continued to answer his phone with the same battle cry he’d sounded for nearly 30 years: “Ready for the revolution!”