15th October 1966 the Founding of the Black Panther Party 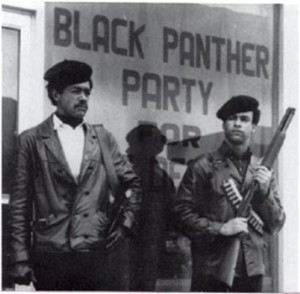 On this day in 1966, in the Anti-Poverty Center in North Oakland, California, two young black American activists composed a “10-Point Program” for their envisaged revolution. Subtitled “What We Want and What We Believe”, this literal call-to-arms represented a significant shift in the African American civil rights struggle which not only forsook the non-violent tactics of Martin Luther King Jr. but upped Malcolm X’s militant ante. In addition to the common cries for equal housing, employment, education and health care, the 10-Point Program codified a radical new vision for a Black Society free from its white oppressors. Here were bold new demands for exemption for all blacks from military service, freedom for all black prisoners, remuneration for the crime of slavery, a United Nations-supervised plebiscite for an independent black colony and the right to bear arms as an act of self-defense from police brutality. This extraordinary manifesto, written by the self-educated Huey P. Newton and Bobby Seale, heralded the active birth of Black Power and marked the official founding of the Black Panther Party for Self-Defense – arguably the most revolutionary post-1776 American movement.

Inspired by the words and deeds of Frantz Fanon, Malcolm X, Chairman Mao and Che Guevara – and equipped with law books, shotguns and a strict uniform code – Newton and Seale mounted an ingenious campaign which quickly catapulted the BPP into a nationwide organisation. Within two years, over 2,000 Panthers were mobilized across America – including some of the most formidable revolutionaries of the Sixties counterculture: Eldridge Cleaver, Stokely Carmichael, George Jackson and Fred Hampton.

Within three years of its inception, J Edgar Hoover would declare the BPP “the greatest threat to the internal security of the country.” Determined to repress the movement, the government turned the Panthers’ credo ‘by any means necessary’ firmly against them. The ensuing onslaught of assassinations, framings, imprisonments and infiltrations would prove too much for the Panthers to weather.

The story of the American government’s covert and illegal war against the BPP is one for another day, so let us instead celebrate the Panthers’ achievements. Their legacy is too often focused on gun-toting rhetoric and theatrical posturing. But we should give much credit to the Panthers for awakening consciousness amongst blacks and whites, and remember especially how well they “served the people” with their groundbreaking community-based Survival Programs, including: testing for diseases, ambulance services, escorts for senior citizens and the hugely successful Free Breakfast – which fed 10,000 underprivileged black children across America every day before school.