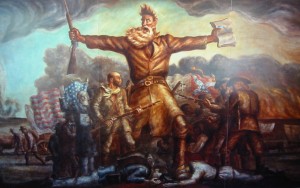 “Men like John Brown appear only once or twice in a thousand years” – Reverdy C. Ransom

Harpers Ferry in northern Virginia, situated at the confluence of the Potomac and Shenandoah rivers, was chosen in 1794 by George Washington to be the site of the United States Federal Armory. And it was here on this day in 1859 that one devout 59-year-old Calvinist and militant abolitionist named John Brown – accompanied by twenty-one men armed with guns, pikes and determination in their hearts – attempted to ignite the rebellion that would put an end to slavery in America.

Brown’s audacious objectives were: to capture the armory, seize the rifles and distribute them amongst slaves who would then rise up beside him in revolt. He would fail spectacularly. But the subsequent trial of “one bold man … defending his rights in good earnest” intensified the bitter divide between North and South and directly sparked the American Civil War. Just two years after the raid on Harpers Ferry, Northerners would march to the tune of “John Brown’s Body” – fulfilling Brown’s last prophetic words before his execution: “… the crimes of this guilty land will never be purged away; but with Blood.”

There can be few examples of one person, acting without wide-scale military backing, whose righteous convictions and bold actions forced as seismic a change for so many as did John Brown’s.