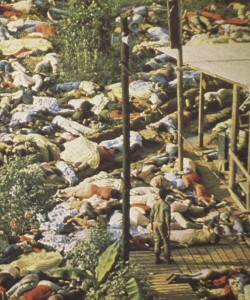 Today we lament the tragic “revolutionary suicides” in Jonestown, Guyana of over 900 brainwashed victims of the Reverend Jim Jones’s Peoples Temple. Originally based in San Francisco, the enigmatic, almost rock star-like Jones had for decades held his dysfunctional congregation together through a criminal regime of bible study, mind and financial control, buggery and hubristic assertions before taking his flock and fleeing to his new base in South America, far from the prying eyes of the suspicious US authorities, who had long been bombarded with pleas to take action by concerned family members of the Jones cult.

It is not the place of this On This Deity entry to give a historical analysis of the Jonestown Massacre, rather it is an opportunity to note how easy it remains for insane assholes – priests, obviously included – to run riot with their fantasy games so long as it is under the auspices of so-called Christianity. That Islam too holds this same facility for misappropriation should also give us cause for concern.