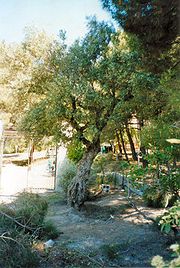 The olive tree at Alfacar close to where Lorca was shot, which has become a place of pilgrimage

Throughout his all too short but trailblazing life, death had been his central artistic theme – and on this day in 1936, at the age of thirty-eight, the Spanish poet and playwright Federico Garcia Lorca met the violent fate he had foreseen when he wrote: “Then I realised I had been murdered. They looked for me in cafes, cemeteries and churches …. but they did not find me. They never found me? No. They never found me.”

Few artists have represented and embodied their nation’s collective spirit better than Lorca – which makes the tragic account of his death all the more heartbreaking. Shortly after the Spanish Civil War broke out in July 1936, Lorca made the misguided decision to leave the safe enclave of Madrid to be with his family in his conservative hometown of Granada. Almost immediately after he arrived, the area was seized by the Nationalist Falangists. In spite of carefully cultivating an apolitical stance, his association with the Republic, his plays which dealt with repression and some anti-Catholic statements in interviews had made Lorca a high-profile target. Although these were certainly contributory factors to the Nationalists’ hatred of Lorca, the likeliest red rag was his homosexuality.

Despite going into hiding, the Falangists hunted down Lorca until, on 16th August, he was arrested and imprisoned without explanation or trial. On August 19th at approximately 3:00am, he was handcuffed to another prisoner – a teacher – and taken in a car to a building called La Colina in Viznar, which the Falange was using as a holding camp for condemned prisoners. Shortly before dawn he was taken out, along with the teacher and two bullfighters (who were members of the Anarchist trade union CNT) and shot. One witness claimed that Lorca was singled out for merciless torture and, in his last moments, was made to suffer for his homosexuality with several bullets targeting his posterior before the fatal shot. Then the body of Federico Garcia Lorca, one of the greatest poets and playwrights of the twentieth century and one of Spain’s most prodigious sons, was unceremoniously dumped in a hastily dug but soon-to-be mass grave.

Though the death of this beloved national hero was quickly covered up by the victorious Nationalists, Franco’s unholy regime was quick to ban all of Lorca’s works; an act not fully rescinded until after the dictator’s death in 1975. And, although a dossier regarding Lorca’s assassination is thought to exist, its failure to surface continues to pain his relatives and associates. In 2009, however, a judge opened an investigation into the circumstances surrounding Lorca’s murder, and the poet’s family reversed their long-standing opposition to searching for his remains amongst the mass grave at Barranco de Viznar.

This action was, according to his biographer Ian Gibson, long overdue: “I have heard oral testimony of what happened, but I think it is essential to find the body, out of respect for Garcia Lorca. Where did they kill him exactly? Did they torture him? One certain fact about his life would be worth 100 books…. Lorca belongs to humanity, not his family. He is an emblem who gave his life for Spain. He is a martyr.”