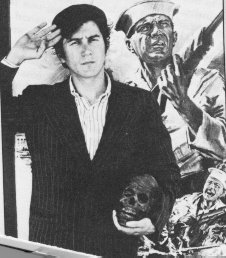 The cover of Phil Ochs 1969 album, Rehearsals For Retirement, is one of the most powerful images of any 60s album. Ochs is pictured in front of the flag with a Revolutionary War rifle slung over his shoulder. Beneath him is a headstone bearing the words: Phil Ochs (American). Born: El Paso, Texas 1940; Died: Chicago, Illinois 1968. It’s an image that encapsulates Phil Ochs. Patriot and Revolutionary.

The riots at the Democratic Convention in Chicago 1968 had left Phil Ochs utterly disillusioned and, in its aftermath, Ochs spiralled downwards physically, mentally and artistically with each year up until he took his own life in April 1976. Chicago shattered the dreams of the extreme idealists of his generation who thought they were going to change the world and bring about the end of the Vietnam war. 1968 had already become the flip side of the American Dream. In February the Mai Lai massacres happened then, both Martin Luther King and Robert Kennedy were assassinated even before the Chicago riots in August saw the police beating the heads of protesters to the clarion call that the world is watching. The radical side of Ochs had been a founder member of the alternative Yippies, the patriot in him supported Senator Eugene McCarthy as the Democratic nominee for President after Johnson had resigned. Ochs’ inner turmoil after events in Chicago was symptomatic of the confusion and consternation among liberals and leftists in America. Amidst the chaos, Nixon strolled into The White House.

Phil Ochs came from what today we’d call a dysfunctional family and one which never talked about politics. It was only at Ohio State University in 1959, majoring in journalism, where Ochs discovered hmself.  Jim Glover was his roommate at Ohio State and he was the one who introduced Phil Ochs to folk music and who taught him to play guitar while Glover‘s father introduced him to socialist politics with tales of union strife, McCathyism and red baiting in the 50s. Dropping out of college in his senior year, Ochs made an immediate impact in Greenwich Village when he arrived there in in 1962. His well informed journalistic approach, writing songs with anger, passion and clarity saw him become the most prolific and focussed topical songwriter in New York City. Most of his contemporaries mellowed and moved on within a few years but Ochs never stopped fighting injustice.  Although his songs became subtler and more internalised, Ochs never said no to a fundraiser or a concert designed to raise awareness for any cause he thought was just and fair.

Phil Ochs is one of the great political songwriters and one of America’s greatest songwriters – period.  There are two distinct phases in his career. His best known and most forthright topical songs appear on his first two Elektra albums All The News That’s Fit To Sing and I Ain’t Marching Any More, its title song become an anthem of the anti-war movement and his own signature song. Other memorable early songs include ’Power & The Glory’, ’Ballad of William Worthy’, ’That Was The President’ and ‘Here‘s To The State Of Mississippi’, Ochs later substituted the word Nixon for Mississippi.  In 1966 he recorded the transitional In Concert. It includes some of his finest, though lesser known songs: ‘Cops Of The World’ or the ambitious critique, ‘Canons of Christianity‘ and, the other side of the coin, the soul-searching ‘Changes’. ‘Love Me I’m A Liberal’ was a damning political song delivered without customary piss and vinegar, condemning those who towed the liberal party line but only when it suited them. Sound familiar?

In 1967, Ochs moved to LA, signing to A&M.  His writing never diminished in quality but his later albums unfairly met with a certain indifference for having abandoned the simple folk form and for embracing more internalised themes. Yet he made four compelling, iconoclastic, experimental pop albums for A&M between 1967 and 1970. The last of these, Greatest Hits, pictured Ochs dressed as Elvis (whom Ochs loved) in a gold lame suit designed by Nudie the tailor, both spoofing Elvis and bursting his own bubble by claiming ‘50 Phil Ochs Fans Can’t Be Wrong!’.

Personal highlights from these four diverse albums include the harrowing ‘The Crucifiction’ and the gorgeous title track from Pleasures Of The Harbour: the exuberant, sardonic ‘The War Is Over’ and epic ‘When In Rome’ – which predicts America crumbling like the Roman Empire (both from Tape From California); ‘The Scorpion Departs But Never Returns’ (from Rehearsals) finds Ochs pleading “But I’m not screaming, no I’m not screaming/Tell me I’m not screaming.” Greatest Hits (they weren‘t, of course) includes the haunting  ‘Jim Dean Of Indiana’ a song Ochs played incessantly to himself at the piano in the weeks before his death; ‘Chords Of Fame‘ with its self-analytical  sneer, ‘God help the troubadour who tries to be a star’  and ‘No More Songs‘. This last song took on deeper significance once Ochs‘ writing dried up during the 70s.

This isn’t the place to dwell on the tragic circumstances that led to his death. Ochs never stopped fighting tirelessly for what he believed in whether it was in small clubs, on picket lines, campuses or in concert halls  or the large scale rallies he organised himself – The Concert for Salvador Allende, May 1974 and the War Is Over rally in Central Park, May 1975 two weeks after peace was negotiated. That Ochs took his own life almost a year to the day that the war ended has led people to speculate that he was deprived of his windmill and now had only himself to face.  The truth is that Ochs was clinically depressed, a condition that went largely unrecognised. In the Spring of 1976, Phil Ochs must have that felt his time had passed, that the old songs no longer mattered. Today they still resonate emotionally and powerfully. Phil Ochs would surely have re-emerged had his illness been understood and treated. Who better to have satirised America under Reagan and Bush or to rail against this generation’s Vietnam war in Iraq?