19th June 1953  the Execution of Julius and Ethel Rosenberg 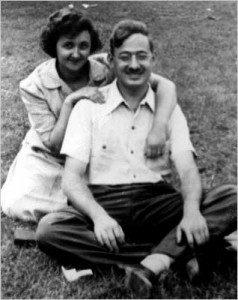 Today marks the anniversary of the execution of Julius and Ethel Rosenberg in the electric chair at New York’s Sing Sing prison. Convicted of conspiring to pass atomic secrets to the Soviet Union, the Rosenbergs – who maintained their innocence to the bitter end – were the only US citizens to be executed under the Espionage Act, in what has been described as the most controversial death sentence in US history. The spectacular trial and unprecedented severe sentencing during the height of Cold War hysteria shook America to its core and generated worldwide condemnation – Jean-Paul Sartre denounced the executions as “a legal lynching that has covered a whole nation with blood.” Over half a century later, disturbing truths about the Rosenberg case and the American government’s complicity in a frame-up remain unresolved.

Julius and Ethel Rosenberg were a devoted couple with two young sons. Growing up in a poor Jewish neighbourhood in New York’s Lower East Side, they’d both witnessed the horrors of pre-war American social injustice: impoverished tenements, evictions of families onto the streets, soup-kitchen queues extending for blocks, malnourished children forced to eat out of garbage cans. “You had to be dead from the neck up to not feel radical,” said a friend of the couple, speaking about the era. And for highly politicised radicals like the Rosenbergs, communism presented a viable alternative. But just how far did their admiration for the Soviet Union extend?

In July 1950, the Rosenbergs were arrested on suspicion of passing information to the Soviets. Eight months later, the couple and co-conspirator Morton Sobell went on trial in New York City for conspiracy to commit espionage during WW2 – when the Soviets were still America’s wartime allies. The principal prosecution witness against the Rosenbergs was Ethel’s younger brother, David Greenglass, who confessed to spying and agreed to testify in exchange for promises that his wife would not be charged and he would be spared the death penalty in his own trial. Greenglass had worked on the atomic bomb Manhattan Project as a low-level engineer without any access to or knowledge of the weapon’s intricacies. He was allegedly the source of information on the bomb’s “secret”, having provided an amateur and inaccurate drawing of the bomb to Julius on the back of a Jell-O packet. He would later admit he’d lied on the witness stand. According to the federal prosecutor, another witness, Harry Gold, the confessed American accomplice of British spy Klaus Fuchs, was “the necessary link in the chain that points indisputably to the guilt of the Rosenbergs.” Gold would also later confess: “I lied so often it’s a wonder steam didn’t come out of my ears.” The Rosenbergs were found guilty and sentenced to death by Judge Irving R. Kaufman who declared their crime to be “worse than murder” and blamed them personally for 50,000 casualties of  the Korean War.

The imposition of the death sentence, however, was itself the tragic result of a failed prosecution strategy. At least a month before the trial began, the Justice Department discussed the usefulness of the death penalty as a device to force the Rosenbergs to confess and hopefully implicate others. The Rosenbergs called their bluff. Even though a confession from one could have saved the other, they both refused to admit guilt or blow the whistle on anyone else.

So, were the Rosenbergs treasonous spies? Recent declassified documents of the Soviets’ Venona Project certainly point a guilty finger at Julius. But the same de-coded information proves that Ethel played no role at all. Was Julius responsible for passing the “atomic secret” to the Soviet Union, thus perpetrating the Korean War no less? According to the Soviets, the information received through Julius was of virtually no use. Their own scientists were brilliant enough, thank you, to need not rely on an amateur and inaccurate drawing on the back of a Jell-O packet.

After all these years, what remains certain is this: the Rosenbergs were not guilty as charged. Their conviction was based on perjured testimony and fabricated evidence. Government agents and agencies orchestrated a frame-up which resulted in their execution. The sham trial and severe sentencing of Julius and Ethel Rosenberg in a country baying for commie blood has been likened to a witch hunt. Remembering the Rosenbergs’ on the occasion of the 50th anniversary of their execution, the New York Times wrote: “[The case] still haunts American history, reminding us of the injustice that can be done when a nation gets caught up in hysteria”.

Indeed, to all those who wonder how the German people could have collectively fallen under the spell of Adolf Hitler, we need only look back at America in the grip of McCarthyism for similar evidence of national mass psychosis.