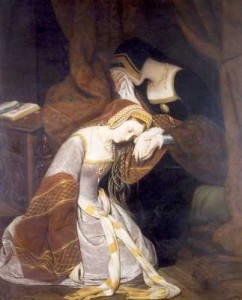 Anne in the Tower, awaiting her fate

On this day in 1536, Anne Boleyn knelt upright on a scaffold in the Tower of London on the orders of her husband, King Henry VIII (1491 – 1547). Looming over her was expert swordsman Jean Rombaud who had been especially brought over from France for the occasion. A single stroke from Rombaud’s weapon sliced her head from her body.

The date of Anne’s birth is lost to us, but on the day she was beheaded, she was still only in her late 20s or early 30s and had been Queen of England for just three years.

When Henry VIII fell in love with Anne she was little more than a teenager, and he had been married to Queen Catherine of Aragon for 24 years. But Catherine had failed to spawn a male heir. Henry was frustrated; he needed a different woman to mother his sons. In 1525, he began to pursue Anne, who was one of the Queen’s maids. But unlike numerous other girls, including her sister Mary, Anne refused to shag him. Spurred on by her obsequious, social-climbing father (it would all end in tears for him, too) she didn’t nob the sovereign until she was Queen of England. Henry was a sportsman and she knew the thrill of the chase would keep his passions inflamed.

She was spot on.

England was still Catholic and Henry had to ask Pope Clement VII to annul his marriage to Catherine. The Pope refused. So cutting a very long and turbulent story short, Henry severed ties with the Roman church and declared himself Supreme Head of the Church of England. Now he reigned over not only England’s political life but its religious life, too. He divorced Catherine in 1533.

Despite her intelligence, wit and political nous, Anne was never going to have an easy ride. The public regarded Catherine as the rightful Queen, and Anne as the whore who had bewitched the King. Miscarriages followed. Perhaps this was proof that she was a witch? That the Almighty had cursed their union?

Henry’s court was a nest of vipers; the King’s advisors operated in an atmosphere of mistrust, whispered betrayals, religious superstition and plotting. With no son to protect her and an increasingly desperate King losing interest in her, her downfall was inevitable. Absurd charges against her of high treason, incest and adultery were fabricated. In a travesty of justice she was found guilty. The only mercy Henry showed was to have her executed in the swift and humane sword-swinging French style rather than a drawn out and grubby burning at the stake.

Anne was a victim in so many ways. There was no other way for a savvy, spirited woman to better herself than by marriage. She was used as a pawn in her father’s ugly power-seeking games, used by Henry to mother his sons, used as a scapegoat by the villainous self-serving bastards at court.

She may have had her head chopped off, but Anne posthumously got the last laugh. She turned out to be a hugely influential figure in English history. In a man’s world she succeeded in rising from commoner to Queen. She was mother of, arguably, the finest monarch England has ever had. She was the reason for England’s break with the superstitions of Catholicism. Amen to that.