1st December 1976 The Filth and the Fury 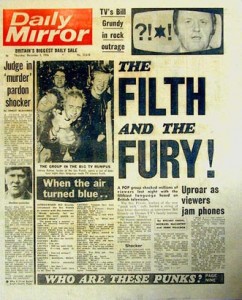 Today we recall the bizarre events of forty-two years ago, in which television presenter Bill Grundy – clearly ill-prepared for the motley posse sat before him, and possibly himself quite drunk – half-wittedly and quite inadvertently handed to the already notorious Sex Pistols the kind of extraordinary media opportunity that was beyond even the wildest dreams of their Machiavellian manager, Malcolm McLaren. Goading the Pistols mercilessly and without good reason, Grundy then appeared genuinely shocked when the lawless (and law-breaking) Steve Jones – resplendent in Vivienne Westwood’s highly inappropriate ‘tits’ t-shirt – unleashed such a barrage of ‘fucks’ and ‘fuckers’ that this merely regional early evening TV news programme catapulted the Sex Pistols onto the national stage. Nobody outside London even saw it. What did they actually say? Overnight, the Sex Pistols legend grew enormous.

Within months, Grundy would be relegated to presenting a book programme on the radio; while the Today programme was cancelled soon after. With hindsight, it’s easy to say that the Sex Pistols were opportunists. But what an opportunity it was that the fool Bill Grundy had handed them. Indeed, we may now even feel pity for this hapless, smarmy half-cut oaf whose destiny it was to be cut down brutally by the fearless and flashing curses of Steve “Never Mind the Bollocks” Jones.