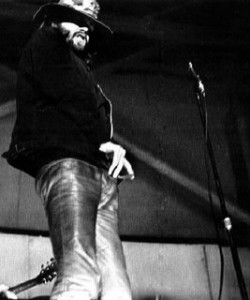 On this day 1969, in his hometown of Miami, Florida, controversial Doors singer Jim Morrison finally abandoned all notions of changing society through his role as a pop singer and entertainer. Instead, profoundly inspired by three successive viewings of the highly experimental Living Theatre’s “Paradise Now”, Morrison conspired to use the Doors’ concert at Miami’s Dinner Key Auditorium to once and for all sacrifice his sex-symbol persona in deference to his original and true guise of Blakean descendant.

In The Intellectual Culture of the Iglulik Eskimos, Knud Rasmussen wrote: “Every great shaman must, when asked and when a number of people are present, exercise his art in miraculous fashion in order to astonish the people and convince them of the sacred and inexplicable powers of a shaman.” And on March 1st 1969, in front of a sardine-packed audience hot and restless from waiting more than three hours for the Doors to appear, Morrison exercised his art in the most provocative, antagonistic, drunken – but, to be certain – miraculous and astonishing fashion.

We know he was passed a live lamb by a member of the audience because there is photographic evidence. And, thanks to sound recordings, we know precisely what he said – that barrage of profanities and audience-bating capped off of course with the notorious “You came for something more, didn’t you?” rant. But did he really expose himself? Lead a snake dance through the auditorium? Disappear from the stage then reappear as if by magic high up in the balcony… puckishly observing the wholly pre-meditated chaos he’d created below? Despite some 13,000 bearing witness to the proceedings, no one seems to have emerged from the Dinner Key Auditorium with the same story.

Jim Morrison’s Miami Mischief Night would result in charges of public profanity and indecent exposure – the subsequent trial and guilty verdict destroying the Doors and forcing Jim to flee to Paris and his untimely fate. But it remains one of the most infamous, legendary performances in rock and roll history; a genuine Dionysian rite of mystery and madness. What would rock and roll be without its myths? Or its greatest myth-maker and sacred superstar, Jim Morrison?