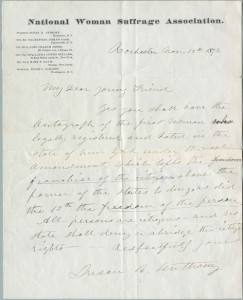 A letter from Susan B. Anthony, celebrating her registration and vote

Today we recall an extraordinary episode in the long struggle for women’s suffrage in America, when Susan B. Anthony – one of the movement’s leading lights – launched a bid for the right to vote so clever and audacious it still dazzles nearly a century and a half later. Ever since the 14th Amendment to the U.S. Constitution was adopted in 1868 – which, in the aftermath of the Civil War, prohibited state and local governments from “depriving persons of life, liberty, or property” – Susan had been waiting for an opportunity to exploit what she believed to be a legal loophole. The chance to test her theory arrived on the morning of November 1st 1872 when her local Rochester newspaper published an editorial that read:

“Now register! Today and tomorrow are the only remaining opportunities. If you were not permitted to vote, you would fight for the right, undergo all privations for it, face death for it. You have it now at the cost of five minutes’ time to be spent in seeking your place of registration and having your name entered. And yet, on election day, less than a week hence, hundreds of you are likely to lose your votes because you have not thought it worth while to give the five minutes.”

Just like the arrogantly patriarchal 14th Amendment, the impassioned editorial had made a glaring omission: there was no mention of gender.

Later that same day, Susan and three of her sisters marched into a local barbershop doubling as a registration centre. Reading the 14th Amendment aloud to the three male electoral registrars, she pointed out that nowhere did it state these privileges were restricted to men – and in accordance with the amendment’s citizenship provision, the women demanded their constitutional right to register. The dumbstruck registrars at first refused, but were no match for this determined woman’s incontrovertible arguments. Reluctantly, they allowed the four sisters to sign their names in the voter registration book. The next day, fifty other women converged on registration centres throughout Rochester and demanded that they too be allowed to register their names.

Four days later, Susan B. Anthony stepped into a voting booth and marked her ballot in the 1872 presidential election. The momentous victory was, however, short-lived; on November 18th, a U.S. deputy marshal appeared on her doorstep with a warrant for her arrest. Sixteen other women had also voted in Rochester on Election Day, and all were arrested – but only the high-profile Anthony was brought to trial for civil disobedience. The infamous milestone case of the United States v. Susan B. Anthony convened seven months later. The presiding judge, Ward Hunt, was a renowned adversary of women’s suffrage and, in the farcical spectacle that followed, refused to allow Susan to testify on her own behalf, deeming her “incompetent”. At the end of the proceedings, he actually ordered the jury to find Susan guilty. Before the stunned jurors could even respond, Hunt dismissed them and declared the trial over. This cynical move ensured that an appeal could not be made to the Supreme Court – which, from the outset, had been Susan’s endgame. Her sympathetic attorney immediately called for a new trial on the grounds that his client had been denied the right to a verdict by jury. The motion was denied, and the defendant was ordered to pay a $100 fine.

Susan B. Anthony’s bold attempt to manipulate the U.S. Constitution perhaps came too soon. It would be another forty-eight protracted years before American woman won the right to vote, and Susan would not live to see that great day which her efforts in no small part made possible.

One Response to 1st November 1872 – Susan B. Anthony Registers to Vote