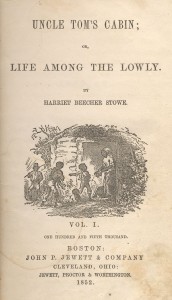 Today we commemorate the anniversary of the publication of Harriet Beecher Stowe’s Uncle Tom’s Cabin; or, Life Among the Lowly – one of the few works of fiction that can lay genuine claim to changing history. A literary incendiary, Beecher Stowe was the first to dare to polemicize slavery – to portray an African-American slave as a central, heroic figure. Christ-like, even. “The most cussed and discussed book of its time,” this verbal earthquake galvanised slavery’s critics, enraged its defenders and laid the psychological groundwork for the American Civil War. Uncle Tom’s Cabin would very quickly outlive its purpose – engendering future controversies, stereotypes and accusations of inadvertent racism – but its sociological and political impact at the time cannot be underestimated. No other novel – before or since – has done so much to alter the thinking of an entire nation.

The daughter of an outspoken religious leader, Harriet Beecher Stowe was compelled to respond to the 1850 Fugitive Slave Law that forbade citizens of free states from in any way assisting in the flight of runaway slaves. And so she took one of the few options available to nineteenth century women who wanted to affect public opinion: she wrote a novel. A huge, enthralling narrative that claimed the heart, soul and consciousness of pre-Civil War Americans. In its attempt “to show the institution of slavery just as it existed,” Stowe cannily sugar-coated the indigestible – portraying her fictional slaves as mothers, fathers, sons and daughters with (Christian) souls. Pushing home the immorality of slavery on almost every page, Stowe deliberately tugged at the heartstrings of women who – in their guise as the “ethical and structural model for all of American life” – were the only ones who could “change the moral fibre of society.” This proto-feminist appeal would spark another movement in addition to the the abolition of slavery, as women in their droves at last began to actively challenge their husbands’ political stances and their own roles as ‘domestic slaves’.

The success of this highly controversial melodrama surprised everyone; readers responded on a scale hitherto unknown in America’s publishing history. Within the first eight weeks, sales of Uncle Tom’s Cabin reached an unprecedented fifty thousand copies. Six months later, it had sold a quarter of a million. A cultural phenomenon, it proved to be the bestselling novel of the entire 19th century, outselling the Bible in its first year of publication.

Harriet Beecher Stowe had not intended war to be the solution to the problem of slavery. At the novel’s conclusion, she asks readers to “feel right.” Once they did, she was certain Americans would come to their moral senses and slavery would be abolished. History, however, chose a different ending. Nine years after the publication of Uncle Tom’s Cabin, the American Civil War began. Shortly afterwards, Harriet Beecher Stowe met President Abraham Lincoln who reportedly said to her: “So you’re the little lady whose book started this big war.”