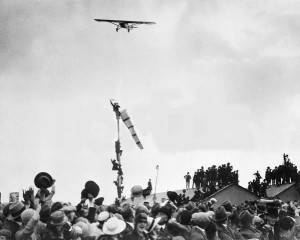 The French greet a Sky God

Today we celebrate, rejoicing with arms outstretched at the audacious and heroic actions of America’s Charles Lindbergh, whose 30-hour flight from America’s east coast to Paris eighty-seven years ago in a single-engine monoplane even shorter than a Spitfire turned him instantly into a World Icon, World Hero and international celebrity. Even more extraordinary is the fact that Lindbergh had not been not obliged by the rules of the day to fly solo – he was chasing the prestigious Orteig Prize of $25,000 – but still chose to do so despite several duos and trios having previously been lost mid-Atlantic. And so, on the 20th May, Lindbergh took off from Roosevelt Field airport, Long Island, in his specially modified Ryan mail plane ‘The Spirit of St. Louis’, a tiny highwing monoplane with fixed wheels, and a powerplant just half the size of an equivalent British fighter of the day. Yes, it’s true that British flyers Alcock and Brown had crossed the Atlantic several years previously in their WW1 twin-engined Vickers Vimy bomber. But this solo flight of Charles Lindberg was entirely more extraordinary for, had the tiny engine of his slender aircraft failed him, Lindbergh would have been lost forever. Tragically, Charles Lindbergh’s epic achievement resulted not in a peaceful later life, but in the kidnap and murder of his baby son. However, let us today muse on what gigantic sense of self-reliance must have motivated this 25-year-old young man to undertake and succeed in such an outrageous and  risky voyage. To Charles Lindbergh and his actions eighty-seven years ago today, hell yes.