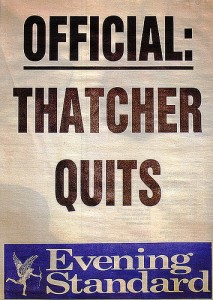 Twenty-seven years ago today, Margaret Thatcher ran crying from 10 Downing Street to a waiting car, having just announced her resignation as Prime Minister of Britain after being forced out of the leadership of the Conservative Party by her own cabinet. That her own downfall was the one and only time she displayed such unbridled emotion is so characteristic of the Iron Lady who, during her 11-year reign, showed no concern for the suffering of others. “There is no such thing as society,” she infamously declared. And her callous creed of greed resulted in wide-scale privatisation – including the selling off and selling out of the entire coal industry, the decimation of the manufacturing industry, the subjugation of trade unions, and the doubling of unemployment and inflation. The roots of today’s financial chaos can be directly traced to the policies she introduced to restructure Britain’s industry and economy to favour private and corporate interests.

The anniversary of Thatcher’s resignation is a date to celebrate and savour. For not only did she have to suffer the ignominious betrayal of her lacklustre cabinet underlings whose opinions she’d long ago presidentially brushed aside, but her demise was in truth ultimately orchestrated by the British people, whom she’d grossly underestimated when – against all advice – she imposed upon them her obscene Poll Tax. Less than eight months after the introduction of this detested levy, which effectively shifted the tax burden from the rich to the poor, a nationwide campaign of mass non-payment, protests and riots led to the toppling of one of the most powerful prime ministers in British history.

Amidst celebrations on the streets of London, Julian and I secured an Evening Standard poster announcing the news that Thatcher had ‘quit’. But she did not quit. She was booted out. And we had the poster framed as a permanent reminder of a great victory for the people of Britain whose collective will resulted in the defeat of a True Cunt.