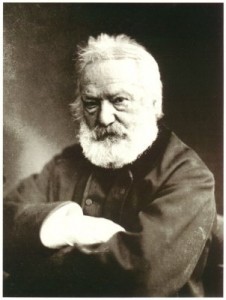 Today we pay our respects to that towering giant of French letters, visionary poet, epic novelist, revolutionary playwright, Romantic, mystic and political activist – Victor Hugo. An unqualified hero to his countrymen, when he died on this day in 1885 aged eighty-three, his funeral prompted mourning hitherto unprecedented anywhere for a literary figure. Over two million flocked to Paris in a spectacular display of grief for this beloved larger-than-life icon, whose radical reversal from royalist to republican resulted in a powerful champion of the downtrodden. In two enduring works of genius – Les Misérables and Notre-Dame de Paris (The Hunchback of Notre-Dame) – he exposed to the world the unsavoury underbelly of French society. Boldly called for an armed uprising against the tyranny of Napoleon III, he subsequently endured 19 years of exile; his triumphant return to France saw him participating on the barricades during the Prussians’ 4-month Siege of Paris, famously forced to eat “the unknown” from the Paris Zoo along with the rest of the starving masses.

Hugo’s statesman-like funeral sounded “the death knell of a century that is ending,” commented Le Figaro. Indeed, in a lifetime that spanned nearly all of the 19th century, Hugo serves as an emblem of French social transition – his life not only coincided with but also actively influenced that turbulent passage from the ancien régime to the democratic republicanism of modern France. A royalist under the Bourbons, an Orléanist under the July Monarchy and a republican under the Second Empire, Victor Hugo bore witness to two monarchies, two republics, two revolutions, two empires and the civil combat and brutal suppression of the Commune. As an observer, participant and monumentally prolific writer, he challenged all the major issues central to society, literature, politics and religion through that epochal period of violent and frequent change.

Victor Hugo was an unlikely combination of radically innovative artist, fully engaged in the task of transforming society whilst simultaneously commanding near universal popularity. He claimed to have a “crystal soul” reflecting the same struggles and evolution as that of the French people. Perhaps only England’s Charles Dickens or Russia’s Tolstoy have enjoyed such a similarly deep, mystical national connection and resonance. As Hugo’s literary contemporary Jules Claretie observed, “No genius was more vast… Our hopes, our passions, all has been encapsulated by Victor Hugo: we have made an altar of his tomb, and the man…has become our symbol.”