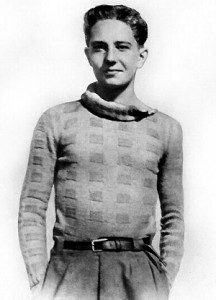 It happened in a quarry behind a prison camp on the outskirts of Châteaubriand. In three groups of nine, twenty-seven men were lined up. Behind them a pit to fall into. Before them a row of German guns. It was the 22nd of October 1941 and terrible scenes such as this were happening throughout Europe. For one reason or another, some of those events have echoed louder in the pages of history than others. And the brutal slayings that took place in that quarry near Nantes have echoed as loudly as any. For it was there that Guy Môquet’s short life was ended. He stood defiantly with his 26 comrades and faced the guns, refusing a blindfold so he could look his killers in the eye. He cried out Vive la France! as the fascists opened fire.Guy Môquet was a young member of the French Resistance. The son of a union leader, he was exposed to radical left wing politics at a tender age and joined the Communist Youth movement in his early teens. In October 1939 his father was arrested during a crackdown on left-wing activists and sentenced to five years in prison, much of which would be spent in a labour camp in Algeria. As Europe went up in flames and anticipating the tumultuous days to come, Guy helped move his mother and younger brother out of Paris to a small village on the coast.

But soon after his sixteenth birthday he returned to the capital to join up with a group of communist friends who had organised a resistance cell in the city. Even as the grey tide marched triumphantly into Paris on 14 June 1940, Guy Môquet was on the streets distributing anti-fascist pamphlets. He was an active member of the Resistance. He was idealistic, good looking, charismatic. And on October 13th 1940 during a Paris-wide crackdown on Communist activists, he was arrested and charged with exactly the same offence as his father… infraction of the decree of 26 September 1939 disbanding Communist organisations.

Guy was questioned by both the French and German authorities, and when they couldn’t get him to name names he was sent for trial. By the end of January 1941, with no confession and no hard evidence against him, the authorities were forced to acquit him of the charges. But this was Occupied France and instead of being released, Guy spent the next four months being transferred from one prison to another. Finally, just a month after his 17th birthday, he ended up as an inmate of “Barrack 10” at the Choisel prison camp in Châteaubriant, Loire-Atlantique. It was where he would die.

But between May and October of 1941 it was also where he fell in love with Odette Leclan, a young communist incarcerated in the camp. And although the segregation of the male and female prisoners meant their love was never consummated, it was to Odette that he wrote his last letter. Though of course, it’s the letter he wrote before that one for which Guy Môquet is best remembered.

On the morning of October 20th 1941 a high-ranking German Officer, Lieutenant Colonel Karl Hotz, was gunned down outside the Cathedral in Nantes. Môquet’s fate, along with that of 47 others, was sealed. The men who killed Hotz were communists and members of the Resistance. The Nazi response was to demand the death of “50 hostages”. It fell to Pierre Pucheu, a minister in the Vichy government, to select those to be executed and he sent a list of 48 names to the Germans.

Pucheu was executed as a collaborator three years later. I can’t help but wonder whether he soothed his conscience by reminding himself of the time they asked for 50 and I only sent them 48… I saved two lives, I did all I could possibly do!

Perhaps not. Pucheu was a more than willing collaborator whose conscience probably didn’t weigh too heavily on him. He was an industrialist and committed fascist who saw the Nazi occupation as a necessary evil; a first step towards an independent fascist France. Which is why there were so many known communists on the list he sent to the Germans. Among them, Guy Môquet.

Today there’s a Metro Station in Paris called Guy Môquet. There are streets and schools named after the resistance fighter. When Nicolas Sarkozy was elected President of France one of the first things he did was to decree that the anniversary of Môquet’s death be marked by a reading – in every school in the country – of that famous letter.

Upon hearing the news that he was to be shot, Môquet penned the letter that keeps his name alive all these years later. It wasn’t a strident call to arms, or an eloquent political analysis. It was a letter to his family. A letter to a mother from a son about to be murdered. It’s sad and it’s sweet… an attempt by a scared and confused teenager to sound brave and composed.

When Sarkozy announced that Môquet’s anniversary should be commemorated by schools, it sparked no little controversy. For some it was a point of principle that politicians shouldn’t be arbitrarily deciding what gets taught in schools. Others felt that the reading of the letter – stripped of context – runs the risk of over-simplifying the events of the past and even wallowing in sentimentality. While still others criticised Centre-Right Sarkozy for attempting to co-opt a resistance fighter who quite explicitly equated capitalism with fascism.

All the same, rightly or wrongly, the letter gets read in many schools. The name Guy Môquet lives on. And so long as it does, we should salute the memory of that scared boy trying to comfort his mother before being led out and senselessly murdered. At the same time we should guard against over-romanticising the individual, and remember that Môquet was but one of millions to die a violent death during that terrible time. Ensure that if his name lives on, it does so not just as the author of a letter, but as a constant reminder of the dangers of unfettered power.