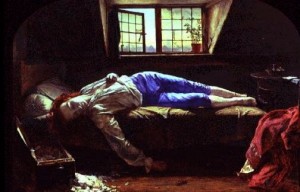 Today we recall the brief, peculiar and tragic life of Thomas Chatterton – English poet, forger of medieval poetry and proto-Romantic – who, aged just seventeen years and nine months old, poisoned himself with arsenic rather than die of starvation in London. Best known by his contemporaries for his series of Thomas Rowley poems, purportedly the work of a forgotten Medieval monk but in reality written by Chatterton himself on 15th century parchment, the life of this ‘marvelous boy’, as Chatterton came to be known, would subsequently touch some of the most eminent English poets – Samuel Taylor Coleridge, William Wordsworth, Percy Bysshe Shelley, Lord Byron, Sir Walter Scott and Dante Gabriel Rossetti – several of whom came to regard him as a muse, whilst John Keats would even go so far as to dedicate his work Endymion to Chatterton’s memory. Indeed, Chatterton’s influence on future generations of artists and poets has continued not so much because of his artistic canon, but because of the extraordinary manner in which it was achieved. So let us look now at the life of this ‘marvelous boy’.

Born in Bristol, 20th November 1752, Chatterton was a solitary child who was at first considered to be slow in learning until the discovery at the age of six of his deceased father’s collection of fifteenth-century documents. His imagination sparked by a bygone era, his intelligence hereafter expanded at an accelerated rate and, by the age of eleven, he was contributing to the Bristol Journal, an eminent periodical of its era. But Chatterton remained solitary, largely existing in a medieval fantasy world in which his best friends were the fifteenth-century heroes and heroines that he accurately imagined, aided by diligent self-study.

Amongst his father’s possessions was a store of fifteenth-century parchments, and it was through these documents that Chatterton was able to craft a masterful ruse: he claimed to have discovered poems written by a fifteenth-century monk named Thomas Rowley that had lain hidden in Redcliffe church for three centuries. Rowley’s poems were hailed as a superlative find; scholars were convinced of both their authenticity and brilliance.

Emboldened by the success of his deception, Chatterton continued to ‘find’ more Rowley poems. But his Rowleyan accomplishments also inspired in Chatterton a confidence in his own work, and, in April 1770, he left Bristol for London to make his living as a poet and writer. It was here that disaster befell him.

Cast adrift from his family and surroundings, Thomas Chatterton initially secured London-based employment through his uncanny ability to parody the various styles of contemporary writers. But whilst it was a talent that led to his work being published in many literary and political periodicals, such hackwork proffered little remuneration, especially to a provincial teenager too green to bargain for himself. Worse still, the poetry Chatterton submitted under his own name met with no success, and the dream of a poetic career faded quickly as his financial situation became dire. Determined to keep up the appearance of professional success to his family in Bristol, Chatterton even refused dinner invitations from his concerned landlady and neighbours, acknowledging his foolishness in his journal:

It is my PRIDE, my damn’d, native, unconquerable Pride, that plunges me into Distraction. You must know that 19-20th of my Composition is Pride. I must either live a Slave, a Servant; to have no Will of my own, no Sentiments of my own which I may freely declare as such; or DIE—perplexing alternative!

By 24th August 1770, Chatterton was destitute, seemingly without prospects and had not eaten for several days. From his garret in Brook Street, Holborn, he wrote a final poem and tore up most of his papers. He then drank a vial of arsenic, and died alone.

One hundred and twenty-five days before he turned eighteen, Thomas Chatterton was buried in a mass grave at London’s Shoelane Workhouse Cemetery. It no longer exists.

2 Responses to 24th August 1770 – the Death of Thomas Chatterton