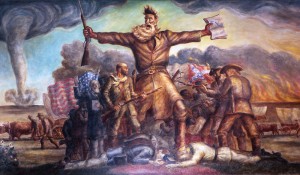 John Brown and the clash of forces at Pottawatomie: the first battle of his Holy War

On this day in 1856 in Kansas, a gang of seven abolitionists paid an unexpected visit to the home of militant pro-slavery advocate James Doyle. Doyle and two of his sons were ordered outside, whereupon the posse executed the three men while the leader of the gang watched on, as if in a trance. Before the night was through, two more members of the pro-slavery “Law and Order Party” were brutally killed – their sword-hacked bodies left on the muddy banks of Pottawatomie Creek. The Pottawatomie killings would provoke fear and reprisals, pushing America one step closer to a showdown on the emotive, divisive issue of slavery. And that was precisely the intention. John Brown – staunch abolitionist, freedom fighter and agent of the Lord – had struck.

Just three days earlier, pro-slavery forces had sacked, attacked and burned the anti-slavery town of Lawrence, Kansas, killing six people. By murdering only five in retribution, Brown said they hadn’t quite evened the score. The two attacks were symptomatic of what became known as “Bleeding Kansas” – a proxy war between Northerners and Southerners set into motion by the Custeristic Kansas-Nebraska Act of 1854, allowing settlers to put it to a vote and decide for themselves whether these new states would be “free” or “slave”. Free-soil and proslavery forces intent on deciding the outcome poured into Kansas, and the area erupted in violence. It was in this volatile milieu that 55-year-old devout Calvinist John Brown arrived from New York at his sons’ request. The Brown boys had written to their father that the Free-Soilers urgently needed “arms more than bread. Now we want you to get for us these arms.” John Brown could hardly refuse. To him, slavery was an unmitigated evil, and by God’s will, he had been put on earth to eradicate it. Appalled that not one abolitionist had dared raise a gun during the Sacking of Lawrence, Brown resolved to act. He took a small group of men under his command and told them to prepare for a “secret mission.” A few nights later, they marched out towards Pottawatomie Creek.

Brown had been determined to “strike terror in the hearts of pro-slavery people,” and so he did. Pottawatomie signified an escalation in the tensions between the Free-Soilers and Border Ruffians, and during the next three months at least two hundred more men died in Bleeding Kansas. A massive manhunt for the murderers was launched, and one of Brown’s sons was killed while two others were beaten to within an inch of their lives. But Brown himself somehow, miraculously, evaded capture. That winter, seemingly under a cloak of invisibility, he evangelically led fugitive slaves out of Kansas on a Moses-like march to the safety of Canada. As word of his crusade spread, the impudence of this cold-blooded murderer enraged Southerners while those in the North saw him as a mythical avenging angel.

Pottawatomie was but the first battle in John Brown’s Holy War. Three years later, in an act of revolutionary vision and unbridled audacity, John Brown attempted to seize the federal armory, distribute the arsenal amongst slaves and ignite a rebellion that would – once and for all – eradicate the nefarious institution of slavery. It didn’t work out quite as he’d planned. For his actions, John Brown was hanged. His one-man Holy War might have failed – but by his words, deeds and martyrdom, Brown sparked another war. As Frederick Douglass said, “If John Brown did not end the war that ended slavery, he did, at least, begin the war that ended slavery.”