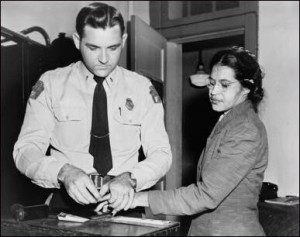 Rosa Parks being fingerprinted in 1955

Today we pay tribute to Rosa Parks – one of the most prominent African American women in history – who died on this day in 2005 aged 92. Rosa’s legendary act of civil disobedience – when, on 1st December 1955, she defied the reprehensible Jim Crow law of segregation by refusing to give up her bus seat to a white man – is broadly recognised as the pivotal event which galvanised the Civil Rights Movement. Upon her death, Reverend Jesse Jackson said, “She sat down in order that we might stand up. Paradoxically, her imprisonment opened the doors for our long journey to freedom.” Rosa downplayed the importance of her contribution, for she was not the first black person to refuse to give up their seat – indeed, someone had been arrested for the same offense a week earlier. But what made Rosa Parks so unique was, as an active member and secretary of the Montgomery, Alabama chapter of the National Association for the Advancement of Colored People, she had standing in the African American community; her intelligence, dignity and convictions made her an exemplary role model and symbol throughout the subsequent court battles for integration. Rosa’s courage was not without enormous personal cost. Harassed relentlessly, both she and her husband suffered from serious stress-related illnesses, lost their jobs and were finally forced to relocate to Detroit. She remained a lifelong activist and, in 1995 at the age of eighty-three, delivered a rousing speech at the Million Man March in Washington. Let us now briefly recall that legendary moment when a forty-two-year-old seamstress forever earned her place in history as a World Heroine, for there can be few more powerful examples of the effectiveness of individual resistance.

Of all the indignities African Americans had to endure in the South, one of the most degrading was the segregation on the city bus system – which largely depended on black passengers for its revenue. Martin Luther King Jr. described the situation: “Frequently Negroes paid their fares at the front door, and then were forced to get off and reboard the bus at the rear. Often the bus pulled off with the Negro’s dime in the box before he had time to reach the rear door.” Moreover, if the “whites only” section was full, blacks were expected to surrender their “colored” seat to a white; if they dared refuse, they risked arrest. Rosa Parks so detested the buses that, whenever possible, she walked. “You died a little each time you found yourself face to face with this kind of discrimination,” she later recalled.

December 1st 1955 had been an especially tiring day at work for Rosa and, opting to take a bus home instead of walking, she was relieved that there was one empty seat in the front of the “colored” section. The bus soon filled up until there were no remaining seats – and, when the driver noticed white men standing in the aisle, he ordered four black people, including Rosa Parks, to give up their seats. Three of the passengers stood up, but Rosa quietly refused. In her own words:

“When I got on the bus that evening I wasn’t thinking about causing a revolution or anything of the kind. I was thinking about my husband … I was hoping he’d had a good day. I was thinking about my back aching and about the pretty sights and sounds of Christmas. But when that white driver stepped back toward us, when he waved his hand and ordered us up and out of our seats, I felt a determination cover my body like a quilt on a winter night. I felt all the meanness of every white driver I’d seen who’d been ugly to me and to other black people through the years I’d known on the buses in Montgomery. I felt a light suddenly shine through the darkness … I told myself I wouldn’t put up no fuss against them arresting me. I’d go along with whatever they said. But I also knew I wasn’t gonna give up my seat just because a white driver told me to; I’d already done that too many times.”

Word of the arrest of this brave and highly respected woman quickly spread through the black community with momentous results. It sparked the thirteen-month Montgomery bus boycott that brought Dr. Martin Luther King Jr. to the forefront of the Civil Rights Movement and resulted in the victorious Supreme Court ruling outlawing segregation on the buses. Rosa Parks became known as “the Mother of the Civil Rights Movement”, and Dr King was inspired to write of her calm but resolute defiance: “She was anchored to that seat by the accumulated indignities of days gone by and the boundless aspirations of generations yet unborn.”