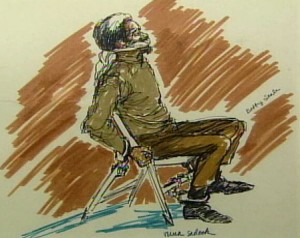 24th September 1969 marked the beginning of the infamous and so-called Chicago Conspiracy Trial – the most highly publicised showcase for the opposing political, cultural and generational ideologies that divided America during its explosive Vietnam years.

Accused of conspiring to incite the riots at the August 1968 Democratic National Convention (“The whole world is watching!” chanted the 5,000 demonstrators as 12,000 police, 6.ooo army troops and 5,000 National Guardsman repeatedly attacked them), the eight high-profile defendants were singled out by the Establishment, prompting an eager J. Edgar Hoover to declare: “A successful prosecution of this type would be a unique achievement for the Bureau and should seriously disrupt and curtail the activities of the New Left.”

For their part, the defendants – a hotchpotch of well-known radicals collectively representing the National Mobilization Committee to End the War in Vietnam, Students for a Democratic Society, Yippies and the Black Panthers – saw the trial as a golden opportunity to publicise their views. Against a backdrop of Judge Julius Hoffman’s obstinate and obvious bias, Yippie founders Abbie Hoffman and Jerry Rubin employed theatrical guerrilla tactics to such maximum effect that proceedings regularly degenerated into a two-sided farce.

But amidst the shambles, a genuine and serious drama centred around the national chairman of the Black Panther Party, Bobby Seale – present at the Chicago Democratic National Convention for only four hours, and barely acquainted with the other defendants with whom he’d allegedly conspired. The shocking and barbaric mistreatment of Seale inside an American courtroom would serve as a sobering reminder that – even within the seemingly level playing field of the counter-culture – in the war against racism, Afro-Americans were still very much on their own.

Seale’s defence had been compromised from the get-go when, after his attorney required emergency surgery, Judge Hoffman refused to delay the start of the trial. Denied the attorney of his choice, Seale rejected the court-appointed replacement and was refused the request to defend himself. And so as the trial began, the Black Panther leader could only interrupt proceedings whenever his name was mentioned to remind the court that he was not represented. After four weeks, Judge Hoffman grew intolerant of Seale’s disruptions. And thus it was, in a scene befitting Nazi Germany, that Hoffman ordered armed marshals to chain Seale to a chair with handcuffs and leg irons and forced a choking gag around his head and into his mouth. Court spectators, jurors and fellow defendants looked on in horror as the Panther leader struggled for breath amidst desperate attempts to speak. The same shocking scene was repeated the following day, until even the prosecution was compelled to object. Disregarding legalities, Hoffman responded by severing Seale from the trial and sentenced him to four years in prison for sixteen acts of contempt. As he was hauled out of the kangaroo court, an incredulous Seale decried, ‘I’m put in jail for four years for nothing?’

The trial would drag on for another four months until February the following year, resulting in guilty verdicts for five of the remaining seven defendants – all of which would eventually be overturned. Even those normally respectful of the American legal system agreed the entire episode had been a farce. But there was certainly nothing farcical about the disconcerting image of a bound-and-gagged Bobby Seale at the peak of the African-American civil rights struggle.