25th June 1876 the Battle of the Little Bighorn 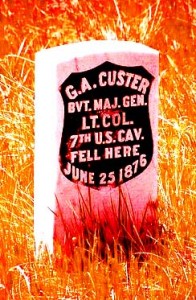 Today we meditate long and hard upon the legendary and heroic but ultimately Pyrrhic victory of Crazy Horse and Sitting Bull’s Indian Alliance at the Battle of the Little Bighorn. Could General George Custer have avoided defeat had this hothead not charged into battle without the unwieldy Gatlin machine guns on offer to him – weapons that elsewhere around the world were wiping out native forces sometimes at a rate of 500 to 1? But then again, let us not underestimate the enormous spiritual damage created by Sitting Bull’s unfortunate victory vision – achieved only after 48 hours of dancing and only then after having sacrificed 100 pieces of flesh from his arms. That his tribe would honour whatsoever visions passed through so great a shaman chief as Sitting Bull reads heroically and quite rightly so to we Moderns, but what was the truth of Sitting Bull’s victory vision? Like Igjugarjuk – the Inuit shaman whose loutish misrule of his village ultimately caused his people to have him incarcerated by the white authorities – could it not be argued that Sitting Bull’s long and protracted vision quest was not equally Custeristic towards his people? If he had to dance for 48 hours to find the truth, then what kind of truth was that? Sitting Bull’s vision deluded the tribes into their alliance. Without the vision, no battle would have taken place at the Little Bighorn. What is certain, however, is that General Custer’s defeat removed the scales from the eyes of the complacent white authorities. For the Battle of the Little Bighorn screamed out its Native American message to President Andrew Johnson: these Black Hills of Dakota, which you bequeathed us in perpetuity just six years ago, will remain in Native hands – or we shall die defending them. Unfortunately for Sitting Bull’s victory vision, that’s precisely what the tribes were forced to do. The shocking news of Custer’s defeat arrived in the east two days after the nation’s centennial, and prompted a thirst for revenge. The American government intensified hugely its military efforts, and Custer’s “Last Stand” also marked the Plains Indians’ last stand.  The Indian Alliance was shattered, Crazy Horse was forced to surrender while Sitting Bull and his people fled to Canada. Within the year, the federal government had stolen back those gold-steeped Black Hills and nearly all the Plains Indians had been confined to special reservations.