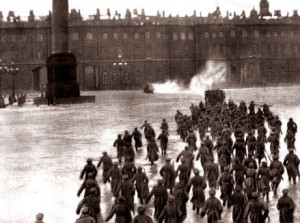 The 1920 Re-Enactment of the “Storming of the Winter Palace”

Today we consider the anniversary of Phase Two of the 1917 Russian Revolution, just eight months after Tsar Nicholas II’s regime was deposed and replaced by a Provisional Government. But the seizure of power by the Bolsheviks in their so-called October Revolution dwarfs even the monumental significance of toppling a millennium-long empire. For this epochal landmark in history marks the very moment when Marxism ceased to be a theory. Henceforth, socialism and communism became a practicing reality, and there would be grave implications for the citizens of the twentieth century.

The Great October Socialist Revolution – also known as the Soviet Revolution, or the Bolshevik Revolution, or Red October; and sometimes recognised on November 7th to correspond with the Gregorian calendar even though, at the time, the Russians were still using the Julian calendar – was in truth a rather underwhelming coup d’état and nothing at all like the mass uprising in February. The decision to seize power from Alexander Kerensky’s ineffectual Provisional Government occurred at a secret meeting only two weeks prior, shortly after Vladimir Lenin – disguised as a train engineer – slipped back into Russia from exile in Finland. The twelve members of the Bolshevik’s Central Committee, recognising that there was not the slightest chance their party could be democratically voted into power, resolved that “an armed uprising is inevitable, and that the time for it is fully ripe.”

The coup was launched on the night of the 24th. Signalled by a blank shot from the cruiser Aurora, Lenin re-emerged from hiding in the town of Smolny, where he took command of his armed proletariat Red Guards who proceeded onto Petrograd and, without need of one shot, seized control of its primary nerve centres including the post office, train stations, power stations and the central telephone exchange. At 2am on the 25th, the virtually unoccupied Winter Palace – former home of the Tsar and new premises of the Provisional Government – was taken bloodlessly by a small group of Red Guards. Accidentally happening upon the remnants of Kerensky’s government, the leader of the assault shouted: “I inform you, all you members of the Provisional Government, that you are arrested. I am Antonov-Ovseenko, a representative of the Military Revolutionary Committee.” The mainly illiterate revolutionaries then forced the prisoners to write up their own arrest papers.

And that was the October Revolution. With no army to fight on behalf of the Provisional Government – for they were otherwise engaged in a hopeless battle on the Eastern Front – the Bolsheviks had almost nothing to overthrow. As Lenin himself put it, they’d “found power lying in the streets and simply picked it up.”

So unlegendary was the coup that in 1920 Soviet propagandists staged a hagiographical re-enactment of the “Storming of the Winter Palace” in order to mythologise an event most Russians had never heard of. But the truth is, the Bolsheviks came to power after a single day of near-effortless revolution that resulted in only two casualties. The death toll would, of course, rise considerably, inconceivably so, as one of the bloodiest civil wars in history erupted. Only in its aftermath at the end of 1922 would Bolshevik power be consolidated.

A year later, Lenin would be dead – and the utopian humanism of Marxist theory would give way to the tyrannical reality of Stalinism.