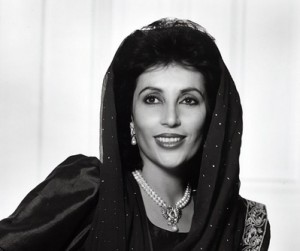 On 27th December 2007, Benazir Bhutto – twice Prime Minister of Pakistan and the first democratically-elected female leader of any Muslim country – was assassinated as she left an election rally in Rawalpindi. Mysteriously done to death by either the assassin’s bullet, a suicide bomber’s blast, or a combination of the two, Benazir Bhutto died as controversially as she had lived. It is not the role of this On This Deity entry to wade into the quagmire that is Pakistani politics. Neither can we apply any Western judgements to Benazir Bhutto’s long and always controversial career. For were we to do this, her actions could only be found horrendously wanting. Corruption, immoral nuclear activities, barely improving the lot of Pakistan’s women and even brown-nosing the Taliban. Instead, we must judge this super-rich, overly-privileged, Western-educated, exquisitely beautiful, audacious and courageous World Figure entirely on her own terms. For, in a highly patriarchal Muslim country such as Pakistan, merely taking her place at the head of the government was – for a beautiful, red-lipsticked, eloquent, highly educated and highly polished woman – nothing less than a revolutionary act. Her privilege, her lucky accident of birth, her inherited fast-track to the top: all of these things must – in Benazir Bhutto’s case – be exempted, if we are to accept the extraordinary victory achieved by her admittedly nepotistic rise to become Prime Minister of fiercely Muslim Pakistan.

One Response to 27th December 2007 – The Assassination of Benazir Bhutto