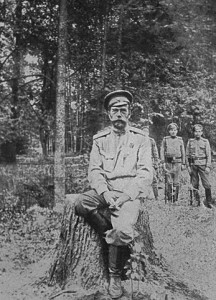 Nicholas II: The Emperor and Autocrat of All the Russias no more

On this day in 1917 Czar Nicholas II abdicated – marking the end of a thousand years of Romanov rule and the beginning of a chain of events that would change the course of world history. Russia had witnessed previous abdications and palace coups, but the revolution of February 1917 marked a qualitative departure – and the complete collapse of the old order.

Nicholas effectively sealed his fate when he took personal command of the failing armies on the Eastern Front in the previous September, and when the Czarina Alexandria similarly tried to take personal control of domestic affairs through a circle of court favourites, most notably her personal advisor Rasputin.

The last Czar is usually characterised as profoundly conservative but essentially also weak and ill-equipped for the role of despot. In fact Nicholas’ delusions in thinking that he could continue to act in the same way as his ancestors was grounded in the peculiar economic and political contradictions of Russian society.

On the one hand in the vast expanses of rural Russia, village life continued much as it had always done. But in the cities incredibly rapid industrial take-off had created, in many cases on the back of foreign investment, some of the largest and most advanced factories in the world. By the time of the First World War it was apparent that Russia had one foot firmly rooted in the middle ages and another alongside the major industrial powers of Europe – although without much of a home-grown capitalist bourgeoisie.

Consequently the ‘democratic’ institutions usually associated with that class were weak or non-existent. The Duma (state parliament) had come into being in response to the popular uprising of 1905, but it remained a thoroughly antiquated body with only consultative powers that could be dismissed at the whim of the Czar and with a skewed franchise that gave particular weight to landowners.

In February 1917, in the midst of the disastrous Great War, all these contradictions came to a head when effectively two revolutions occurred simultaneously:

Within the ruling class there was a crisis of confidence in the royal family. A warning shot had been fired in December when a faction of nobles had murdered the Czarina’s favourite Rasputin. In January, faced with over a million casualties at the front, General Krimov told the head of the Duma that the Czar no longer had the confidence of the army – and that the high command would support the liberal and constitutional-monarchist deputies within the parliament seizing power. The deputies took no action other than to warn the Czar – but at the same time the workers at the Putilov factory and the women of Petrograd took the initiative and forced the pace of events.

On 22nd February after a week-long strike at the huge machine tool plant, the workers were locked out by their employers – so in response they organised a demonstration of 20,000. The next day they were joined by thousands of women marking International Women’s Day and protesting at the chronic inflation that had led to rapidly rising food prices. In the following days over 200,000 workers in Petrograd took to the streets, with an almost equal number of troops in the city poised to suppress the protests.

The turning point came on 26th February when the troops refused orders to open fire on the crowds and a number of regiments openly mutinied. Finally Nicholas submitted to his ministers’ and generals’ advice and abdicated in favour of his brother, Grand Duke Michael.  Michael seeing a position as constitutional monarch as untenable declined the crown and the Duma announced a provisional government under liberal aristocrat Prince Georgy Lvov.

Meanwhile the workers and mutinying soldiers formed their own council  – the revival of a body originating in the earlier 1905 uprising – the Petrograd soviet. Straight away their  ‘Order No 1’ made it clear that they the revolution they believed to be theirs’ was not to be constrained by the precarious new liberal regime:“The orders of the Provisional Government shall be executed only in such cases as do not conflict with the orders and resolution of the Soviet of Workers’ and Soldiers’ Deputies.”

For the next eight months the provisional government and the soviet vied with each other for legitimacy and control. Trotsky – sometime chair of the Soviet in both 1905 and 1917 – characterised this power struggle as the time of  ‘dual power’. This struggle came to a crisis in August when the provisional government now under Kerensky had to resort to arming the soviet with 40,000 rifles to assist in defending the city against an attempted military coup by General Kornilov.

As a result, Kerensky’s government found itself increasingly alienated from the Petrograd masses – whilst the Bolsheviks steadily gained support as the only party consistently standing for an end to the war with Germany, land reform and workers’ control of the factories. By October they and their allies – the Left SR’s (Socialist Revolutionaries) – had gained a majority amongst the delegates of both the Petrograd Soviet and the All-Russian Congress of Soviets. And the stage was set for the next stage in the continuation of the revolution begun with Nicholas’ abdication…