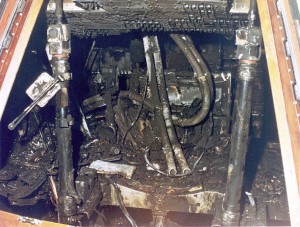 The incinerated command module of Apollo 1

Today we pay tribute to the three American astronauts of Apollo 1, who died on this day in 1967 when their command module cabin caught fire during a pre-launch test at Cape Kennedy. The flight had already caused controversy when, just days prior to the accident, Apollo 1 Command Pilot Virgil ‘Gus’ Grissom, had declared NASA’s dreams of an imminent moon landing to be delusional. Despite the awful tragedy of this Apollo 1 disaster, however, now is probably an opportune time to comment that, considering the entire NASA space programme had been built around Nazi rocket development and run in Florida by Wernher von Braun – architect of the London Blitz – it is more surprising that this gung-ho seat-of-their-pants attitude had not reaped a far higher rate of space casualties. Perhaps the super rich pickings of Nazi rocket development shipped back to the USA in 1947 so awed American scientists that their fervour gripped politicians too; Gus Grissom complained of their really needing not two but ten more years of space exploration in order to safely effect a moon landing. A few days later he was dead. For this was the Cold War – a time when the safety of a few astronauts was clearly secondary to the aspirations of the world’s two super powers. Indeed we only have to look at this statement from Lydon B. Johnson in order to understand their “new New Order” worldview that both America and Russia believed space exploration offered them:

“Control of space means control of the world … From space the masters of infinity would have the power to control the Earth’s weather, to cause drought and flood, to change the tides and raise the levels of the sea, to divert the gulf stream and change the climates to frigid … And if there is an ultimate position then our national goal and the goal of all free men must be to win and hold that position.”