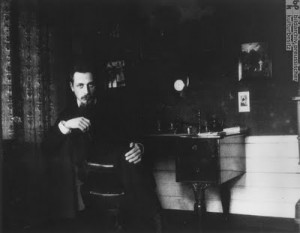 Today we pay tribute to Rainer Maria Rilke, who died of leukaemia on this day in 1926 at the age of fifty-one. In the age of disillusionment, Rilke was a mystic who pondered the Big Questions – life, love, meaning and death – without relying on religion or a patriarchal God as his crutch. His extraordinary poetic achievements, in particular The Duino Elegies and The Sonnets to Orpheus, are such milestones that he is considered the greatest-ever lyric poet in the German language, and indeed one of the most significant poets of the entire twentieth century. Nevertheless, it is not the intention of this On This Deity entry to attempt an artistic overview, nor a brief biography of his troubled life. For my own fascination with Rilke comes primarily through his letters – there exists a vast trove of some 7,000 of them – particularly with his mentor, lover, muse and literary ally, Lou Andreas-Salomé – a formidable intellect herself and the most significant person in Rilke’s life, it was Lou who suggested he change his name from René to the more elegiac Rainer. Like so many of the great mystics, Rilke was a confirmed solitary (“I want to be with those who know secret things or else alone,” he famously declared). The Correspondence between Rilke and Andreas-Salomé – spanning their entire 29-year relationship – is therefore a fortuitous opportunity to eavesdrop on the visionary insights of a genius who had no one at home to share them with. Similarly, the ten celebrated Letters to a Young Poet offer Rilke’s deeply profound musings on self-reliance, uncertainty, solitude, adversity, sex, love, spirituality, art and – especially – the process and duty of the poet:

“If your daily life seems poor, do not blame it; blame yourself, tell yourself that you are not poet enough to call forth its riches; for to the creator there is no poverty and no poor indifferent place.”

“No one can advise or help you — no one. There is only one thing you should do. Go into yourself. Find out the reason that commands you to write; see whether it has spread its roots into the very depths of your heart; confess to yourself whether you would have to die if you were forbidden to write.”

Like Henry David Thoreau’s Walden, the letters of Rilke are verily Life Manuals of exquisite prose, grace, wisdom, unceasing inspiration and usefulness not only for would-be poets, but for those who seek to live their lives poetically.