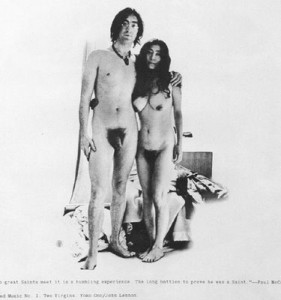 Today we commemorate the anniversary of the UK release of Unfinished Music No. 1: Two Virgins – the first artistic collaboration between John and Yoko – for whom, as the Romeo and Juliet of their time, no surnames are required. Eighteen months after their legendary meeting at the Indica Gallery, their relationship was finally consummated one equally legendary night in May ’68 when their respective spouses were abroad. As John recalled, “She came to the house and I didn’t know what to do; so we went upstairs to my studio and I played her all the tapes that I’d made, all this far-out stuff, some comedy stuff, and some electronic music. There were very few people I could play those tapes to. She was suitably impressed, and then she said, ‘Well, let’s make one ourselves,’ so we made Two Virgins. It was midnight when we started, and then we made love at dawn. It was very beautiful.” And so it came to pass that the super-couple chose to declare their Higher Love to the world by releasing the avant-garde soundtrack to what is possibly the most extraordinary “first date” ever. It didn’t matter that the music was unlistenable and nobody bought it. Because the infamous Two Virgins cover, a full-frontal nude portrait of Beatle John and his freaky new Japanese girlfriend, was a revolutionary statement. As John Sinclair wrote at the time, “It’s a pure social act above and beyond any music industry bullshit, and it was a daring move indeed. The phoney ‘nice-guy’, ‘boy-next-door’ image of the hungry early Beatles is smashed to smithereens, and the repressive effect of that kind of brainwashing gets totally reversed with one little photograph.”

Two Virgins heralded the birth of the most iconic couple of the twentieth century and established their long-running collaborative model of his fame and talent through her conceptual Fluxus filter. For the next five years, as the High Priest and Priestess of Peace during the explosive Vietnam era, John and Yoko injected blatantly revolutionary content into their art and threw their celebrity and power behind every significant struggle on the radical agenda. Moreover, their relationship forced the western world to confront its ugly and persistent racism and sexism. That they abandoned their activism when the FBI turned up the heat and threatened to deport John from his adopted home in New York should in no way devalue their efforts. John and Yoko dared to promote a revolutionary agenda to the masses, and they came damned close to succeeding.