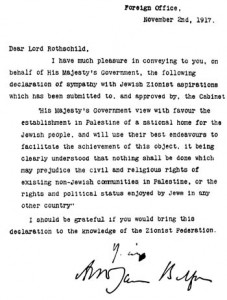 On this day in 1917, British foreign secretary and former prime minister Lord Balfour lit the fuse of an almighty powder keg when he wrote to the financier Lord Rothschild, Britain’s most influential Jew: “His Majesty’s Government views with favour the establishment in Palestine of a national home for the Jewish people.” Today’s chronic instability in the Middle East can be traced directly back to these eighteen lethal words which came to be known as the Balfour Declaration. Issued one year before the end of World War I, this extraordinarily arrogant statement reveals the extent to which the British Empire then controlled the outside world. For the Palestinian lands that Lord Balfour was so generously promising to World Jewry were, at that time, still in the possession of the Ottoman Empire.

It is not the place of this On This Deity entry to engage here in the thorny problem of Israel and Palestine, rather it is an opportunity to comment on the transitory nature of seemingly omnipotent Empires. For, at the time when Lord Balfour made his outrageous 1917 declaration, British politicians and leaders had clearly become so used to policing the world and generally running things that it appeared to them almost a natural state of affairs to demand a say in the futures of far distant countries. However, the Balfour Declaration was – with World War I still raging –really no more than an elaborate bluff, an attempt by the beleaguered British to guarantee continued Russian involvement in the war and promote the USA’s entry into the war by courting the large Jewish populations of each country. For Britain’s War Cabinet had concluded – despite having promised to reward the Arabs for their wartime aid – that supporting a Jewish entity in Palestine would mobilize America’s influential Jewish community to support United States intervention in the war, and also sway the large number of Jews who participated in the 1917 Bolshevik Revolution to keep Russia participating.

And so it was that the British Empire’s self-interests – like the self-interests of all empires previously – ultimately satisfied nobody AND sold out everybody. But such is the way of empires and it’s why we must fight against them. For, long after those fleeting empires have bitten the dust, the implications of those arrogant, hubristic and blinkered decisions made by long-forgotten politicians come back to kick future generations in the face.