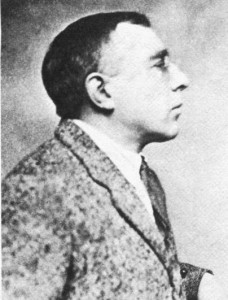 Today we pay our respects to the Russian philosopher, teacher and esotericist, P.D. Ouspensky, who died on this day in 1947. Indisputably brilliant in his own right, Ouspensky is nevertheless best remembered because of another man’s brilliance. For despite his success as a mathematician, journalist and author, Ouspensky abandoned his own promising career to become a disciple of George Gurdjieff – the extraordinary Greek-Armenian mystic and prophet to whom Ouspensky is inescapably linked. In evaluating Ouspensky’s legacy, however, it is in no way fair to define him so narrowly as a “Gurdjieff disciple” when, in truth, he was “Gurdjieff’s Saint Paul”. Ouspensky succeeded in making accessible Gurdjieff’’s often indecipherable teachings, thus providing an invaluable contribution in his own right to the study of  inner development, the transcendence of our mechanical selves and the “War Against Sleep”.

On New Year’s Day 1912, Gurdjieff arrived in Moscow to teach his revolutionary method of self-development. Unlike the three traditional paths to higher consciousness, Gurdjieff’s system did not require complete seclusion; through precise physical and mental disciplines, enlightenment could occur in the midst of everyday life. Ouspensky met the Armenian sage in the spring of 1915, and he immediately abandoned his own path to become one of Gurdjieff’s most enthusiastic and proficient pupils. “I realized that I had met with a completely new system of thought surpassing all I knew before. This system threw quite a new light on psychology and explained what I could not understand before in esoteric ideas.”

After seven years and for reasons unknown, Ouspensky broke away from Gurdieff and declared his work would henceforth proceed independently. Ouspensky would nevertheless devote the rest of his life to Gurdjieff’s teachings. He moved to England and taught the system – which he dubbed the “Fourth Way” – with great success, gaining disciples of his own. But it is Ouspensky’s personal account of his relationship with Gurdjieff, In Search of the Miraculous (published posthumously in 1949), which is likely to serve as his most enduring achievement. It not only remains the most concise and comprehensible explanation of Gurdjieffian thought but, of equal significance, it also reveals Ouspensky’s own formidable and credible intellect: this was not a man likely to fall victim to some quack. By illuminating, verifying and validating Gurdjieff’s system, Ouspensky verily brought forth one of the most useful and trustworthy gnostic guidebooks for those who would seek to activate their higher selves.