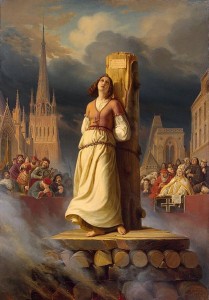 Hermann Stilke's 1843 painting of the death of Joan of Arc

“Whatever thing men call great, look for it in Joan of Arc, and there you will find it.” – Mark Twain

On this day in 1431, the English tied a 19-year-old French peasant girl to a pillar in the square in Rouen and burned her alive. Her executioners were so afraid of relic-hunters they reduced her body to ashes which were then thrown in the river Seine.

At the time of Joan of Arc’s death The Hundred Years’ War had already been raging for 94 years. The War, a series of conflicts which actually lasted 116 years, was a power struggle between various French noble houses and the English, who claimed dominion over vast tracts of France. The prize was well worth fighting for: the French throne itself. It was in this web of Anglo-Gallic argy-bargy that Joan became entangled and would emerge as a saint.

Joan grew up in Domrémy, a tiny village which had been periodically trashed and burned during the Wars. At the age of just 12 she had visions of Saints Michael, Catherine and Margaret who told her to drive out the English. Joan was a good Catholic girl and good girls don’t argue with the Word of God. Joan was on a mission.

Demonstrating remarkable powers of persuasion and political acumen for one so young, aged 16 she got an audience with the uncrowned King Charles VII and told him of her holy quest to have him restored to the throne. Experienced military commanders, Counts and Dukes all pooh-poohed her, but she was not to be deterred. At their second meeting the King saw her unwavering righteousness and took a chance. He needed to, because things were looking desperate. By 1429 the English had Orléans under siege. Strategically the city was vital for French forces to recapture. Only a leader with his back against the wall would put his faith in a farm girl dressed in men’s clothes who took orders from angels.

Joan took 5,000 men and rode to Orléans. She had the king, the saints and the Good Lord on her side! She dressed as a bloke and cut her hair; it was more practical and it would protect her from unwelcome male advances. Joan is reported to have been a skilled military tactician and strategist, a charismatic leader. She mounted carefully planned raid after raid, and with blind faith worn like a suit of armour, she inspired the soldiers. Incredibly, they broke the siege in just a few days.

More success followed. But during military action in Burgundy she was unhorsed and captured. This set in motion a woeful chain of events which would lead to her being sold by her Burgundian captors to the English who tried her as a heretic in a dodgy kangaroo court.

Just 24 years after her death she was retried and declared an innocent martyr. Too late for poor Joan who, having fulfilled her Holy Mission, had just wanted to go home to mum and dad in Domrémy.

The Maid of Orléans was undoubtedly a righteous and brave warrior, defeating les rosbifs and fighting for the freedom of France. No wonder she is a national heroine on the other side of The Channel. Books and plays have been written about her. Films made. The Catholic Church sainted her. Visionary, martyr, call her what you like; but it’s worth remembering that Joan was essentially just a girl with a big idea determined to get out there and change things.