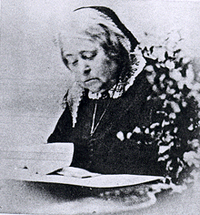 Today we pay tribute to Elizabeth Peabody – author, publisher and education pioneer – whose progressive and intellectual contributions played a pivotal role in igniting and facilitating the American Transcendentalist movement. Born into a poor but intellectually rich family, Elizabeth was the eldest of three brilliant and accomplished sisters described by their biographer Megan Marshall as the “American Brontës”. In the early 1840s, the Peabody sisters – not through typical female coquetry but by virtue of their magnetic intellects – attracted New England’s boldest reformers and literary lights to the front parlour of their home, which also served as Elizabeth’s own book store. The celebrated Wednesday-night open houses in the West Street Book Shop became the gathering place and nerve centre of intellectual and reformatory debate, giving birth to a new movement of ideas as the sisters fired the imaginations of Ralph Waldo Emerson, Nathaniel Hawthorne, Bronson Alcott and Horace Mann to name but a few. This “interior revolution”, as Elizabeth described the bourgeoning American Transcendentalist movement, would go on to transform a young nation from a parochial theocracy to a secular democracy. Groundbreaking in every respect, the Transcendentalists were unique for their inclusiveness of gender; these freethinking men and women had no regard for “traditional” male privilege, and Elizabeth Peabody was from the movement’s inception a central figure – anticipating both Emerson and Henry David Thoreau with her notions of the God Within. In addition to her own prodigious and broad-minded thinking, she was an entrepreneur and facilitator par excellence: her West Street Book Shop and lending library also served as the venue for Margaret Fuller’s radical women-only  “Conversations” and provided New England’s only outlet for German, French, Spanish, Italian, and British progressive books and periodicals which stimulated discussion and inspired visionary plans such as those for the utopian Brook Farm community. At West Street, Peabody also published works under her own imprint – most notably Hawthorne’s first three books and William Ellery Channing’s influential anti-slavery pamphlet, Emancipation (Elizabeth gave the copyright to abolition groups, thereby forfeiting her own profits). For one-third of its existence, Elizabeth served as publisher for the Transcendentalists’ own journal, the Dial, as well as contributing to it some of her own best articles. But while she was at the very core of this great era of creative and idealistic ferment, her most notable legacy is in fact independent from her esteemed coterie – as Elizabeth Peabody is generally recognised to have introduced the kindergarten into the American educational system.

Elizabeth Peabody had a lifelong association with teaching and education – she set up her first school at the age of eighteen – and was closely acquainted with some of America’s foremost educational reformers. By the late 1850s, she came under the influence of Friedrich Froebel, the German founder of the kindergarten. In 1860, Elizabeth opened America’s first-ever school for children under the age of six, and the kindergarten would prove to be the one passion of her life that received success and nationwide approval. But, of far greater significance, by influencing the lives of its youngest citizens, Elizabeth Peabody fulfilled her aspiration to contribute to the greatness of Future America. Her previous careers as teacher and philanthropist seemed to have perfectly prepared her for this work which she took up in the spirit and intent of Transcendentalism, retaining her views of the soul as active and that “inspiration is the universal principle of education.”

Elizabeth Peabody’s life spanned nearly the entire 19th century. When she died aged 89, no one from her circle was able to write her memorial as she’d outlived all her contemporaries. The inscription on her tombstone in Concord barely hints at her extraordinary accomplishments: “Every humane cause had her sympathy / And many her active aid.”

3 Responses to 3rd January 1894 – the Death of Elizabeth Peabody