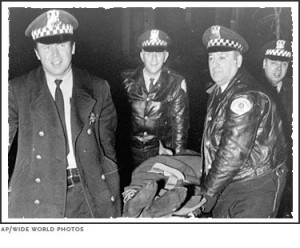 Today we pay tribute to and recall the shocking circumstances surrounding the murder of Fred Hampton – 21-year-old deputy chairman of the Illinois chapter of the Black Panther Party and considered by many to be the most inspiring young African-American leader to emerge in the wake of Malcolm X and Martin Luther King Jr.. On this day in 1969, Hampton was brutally assassinated by the Chicago Police in collusion with, and on the direct orders of, the FBI after J. Edgar Hoover declared the Panthers “the greatest threat to the internal security of the country” and commanded the notorious COINTELPRO (counterintelligence program) to neutralize leading black political activists and destroy their organisations.

Noam Chomsky describes this shocking incident as “the gravest domestic crime of the Nixon administration” – and for those with an anti-authority interest, I would urge you to watch the 1971 documentary The Murder of Fred Hampton. But let us now briefly recall the facts of this shameful chapter in American history, and lament the loss of a true luminary – whose murder heralded the end of the Sixties, and with it that decade’s revolutionary dream.

At 4.00am on December 4, 1969, Chicago police raided the apartment that was home to several of the city’s most prominent Black Panthers. Mark Clark, the BPP defense captain, was on security duty. He had time for one reflexive shot at the ceiling before the Chicago police opened fire on him. Over 200 gunshots would be fired in the next five minutes, but Clark’s was the only one from a Panther rifle. The police then turned their machine guns towards the wall of the bedroom where Fred Hampton lay sleeping with his fiancé, Deborah Johnson, eight-and-a-half months pregnant with their son. Johnson tried desperately to rouse Hampton, but he never woke. Earlier in the evening, Hampton had been drugged by his trusted bodyguard, William O’Neal – who was in fact an FBI informant and had back-stabbingly provided the Chicago police with a floor plan of the apartment. As fellow Panthers screamed that they were shooting at a heavily pregnant woman, police stormed the bedroom and removed Johnson. Two officers approached the still-sleeping Fred Hampton who’d been shot and wounded in the shoulder. After a chilling silence came the sound of two shots, fired at point-blank range into Hampton’s head. “He’s good and dead now,” one officer was heard to have said.

Four other Panthers sustained gunshot wounds. All were arrested and charged with attempted murder as the Chicago police lied through their teeth about what went down. At a press conference the next day, Chicago’s finest insisted they’d been “violently attacked” by the Panthers and were simply themselves. As evidence, they issued a photograph of a door with “bullet holes” later discovered to be nail heads. The grieving Chicago Panthers responded by inviting the public to view the crime scene. Thousands visited and were appalled by the bloody and indisputable slaughter of these young civil rights leaders.

No law enforcement officials were ever convicted of the crimes. Bu when activists burgled a Pennsylvania FBI office in 1971, they discovered and exposed documents conclusively proving that the raid had been a successful assassination attempt sanctioned by the FBI. Informant William O’Neal had been paid handsomely for his dirty deed, it was discovered,  but he would never again know peace. Years later he committed suicide after admitting his involvement in Hampton’s assassination.

Although the sickening story of Fred Hampton’s death is sadly indivisible from his life, on this anniversary of his assassination, let us not neglect to pay tribute to this quite remarkable young man – targeted specifically by the FBI for what they identified as his “messianic” qualities. To members of Chicago’s African American community in the late 1960s, no leader was more inspiring, articulate, effective or dedicated to the liberation of black people than Fred Hampton. A relentless grass roots organiser, he established food pantries, educational programs, recreational outlets and free breakfasts for impoverished black children. Perhaps his most extraordinary accomplishment – and sobering evidence of what more he might have achieved – was his brokering of a non-aggression pact between Chicago’s notoriously violent multi-racial street gangs. In May of 1969, Hampton called a press conference to announce a truce had been declared among this “rainbow coalition,” a phrase coined by Hampton and made popular over the years by Rev. Jesse Jackson.

Fred Hampton’s murder was a great tragedy to all who knew him and a monumental setback to the civil rights movement. But the young Panther understood the threat he posed to the Establishment. One of the most celebrated orators of his generation, Hampton concluded a rallying speech shortly before his death with the chillingly prescient declaration: “But when I leave, you’ll remember I said, with the last words on my lips, that I am a revolutionary!”

3 Responses to 4th December 1969 – The Murder of Fred Hampton