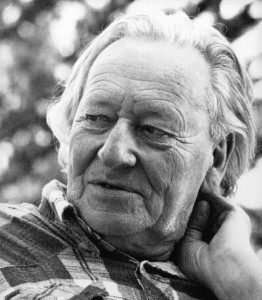 There is no shortage of events to remember on July 4th. So I’m extremely pleased that On This Deity finds room today to celebrate the life and commemorate the death of Gregory Bateson. The first time I encountered Gregory Bateson’s name, he was described to me as “the most important thinker you’ve never heard of”. And that’s the description I tend to use when recommending his work to others. Because although his ideas have indeed been influential, and despite the fact that his work is finally beginning to leak into popular consciousness, the fact remains that the vast majority of educated, informed people are wholly unfamiliar with Bateson and his legacy.

Which is perhaps no big surprise; for unlike most of the revolutionary thinkers who have graced this site over the past eleven months, it is my contention that Bateson’s time has yet to come. His seminal work, Steps to an Ecology of Mind sits comfortably on the same shelf as Freud’s The Interpretation of Dreams, Marx’s Das Kapital, Einstein’s Relativity or Darwin’s On the Origin of Species. The primary difference being that the cultural impact of Steps to an Ecology of Mind is still ahead of us. For it seems clear to me that should modern humanity survive the crises that seem certain to confront us this century, it will be by adopting the kind of thinking to be found in the work of Bateson.

Gregory Bateson was born in the small village of Grantchester, just outside Cambridge, in 1904. His father – the biologist William Bateson – was arguably the world’s first geneticist (he coined the term “genetics” and founded the first “school of genetics” at Cambridge University in 1900 to champion the work of Gregor Mendel, in honour of whom Gregory was named). Gregory’s mother was Caroline Beatrice Durham, herself a towering intellect who collaborated on much of William’s later work. William and Caroline had three sons; Gregory and his two older brothers, John and Martin. All three boys were academically gifted and appeared to have extremely bright futures as scientists. However tragedy was to strike when John, the eldest, enlisted to fight in World War I despite his father’s conscientious objection. Less than a month before the war ended, John Bateson was killed in action and while the whole family was hit hard by this event, the middle brother, Martin, was unable to recover. Four years later, having been rejected by the woman he loved and on what would have been John’s 24th birthday, Martin publicly commit suicide by shooting himself in the head beneath the statue of Anteros in Picadilly Circus.

Gregory initially coped with his grief by burying himself in work. The year after his brother’s suicide he completed his BA in biology at St. John’s College, Cambridge. Three years later he had completed postgraduate work in linguistics and was lecturing on the subject at the University of Sydney, Australia. By the early-1930s he had switched to anthropology and conducted lengthy fieldwork in New Guinea and Bali where he spent several years living with indigenous tribes. Together with the controversial Margaret Mead, who he married in 1936, Bateson helped revolutionise the field of anthropology by attempting to exorcise the spirit of imperialism that dominated the discipline. He insisted that western civilisation had far more to learn from these supposedly “primitive” cultures than they had from us (“If there’s one thing the west has to offer other cultures”, he said, “it is a terrible warning”). At the same time he realised that the relentless expansion of industrial capitalism would soon overwhelm the few untouched cultures that remained, and he sought to document and preserve as much of their wisdom as he could.

It was while carrying out this anthropological fieldwork that Bateson’s involvement in cybernetics / systems theory began. Until then, systems theory had been largely confined to studying mechanical systems, with a minor branch leading into biology. Bateson realised that the same kinds of feedback loops that were being studied in engineering and biological settings also existed in other complex systems, including societies and cultures. He developed the concept of “schismogenesis” (literally: “creation of division”) to explain these feedback loops in a cultural framework and used it to provide the first detailed systemic analysis of such phenomena as class war, arms races and national character. He suggested that two distinct forms of schismogenesis existed (symmetrical and complementary) but that both were ultimately destructive for an society in which they manifest and that sustainable cultures contained inbuilt mechanisms to prevent runaway schismogenesis. In his 1949 essay, Bali: The Value System of a Steady State Bateson describes a culture that has evolved such inbuilt mechanisms. And although it would be another decade before he explicitly stated it, he implies in 1949 that western culture must learn from such cultures and develop analogous mechanisms to prevent it from tearing itself apart.

By 1950, however, Bateson had moved to the United States to immerse himself in yet another new field. This time it was psychotherapy that drew him. The mind, he believed, was yet another complex system that could be analysed and understood better by relating it to other complex systems – cultures, ecosystems and so on – than by simply examining it in isolation. Working initially with traumatised war veterans and alcoholics, he found himself eventually treating schizophrenic patients in Palo Alto, California where he developed the ground-breaking “double-bind” theory to explain the development of schizophrenia. However, even as his theory was being heralded as a psychotherapeutic breakthrough by colleagues at Palo Alto, Bateson had begun to reject what he called the “medical metaphor” of psychology and suggested that the double-bind theory was more a general analysis of why complex systems break down than it was a tool of mental health.

And so, by the late 1950s Bateson was on the move again. This time, tangentially revisiting his earlier work in linguistics, he collaborated with John C. Lilly on his research into dolphin communication patterns. Bateson and Lilly spent months analysing dolphin behaviour and “language” in the hope not only of discovering a way to communicate effectively with these mammals but also of better understanding the notion of communication itself. Ultimately, however, Bateson became convinced that meaningful, complex communication between humans and dolphins was not possible and he split with Lilly. “They have no hands, you see” was how he summed up the essential obstacle. Human language is “thing-orientated”, he suggested. It’s all about objects… things we can touch and hold. Nouns. Because the world of dolphins contained comparatively few “objects”, they have little use for a language structured around nouns. As a result, any attempt at translating one into the other was doomed to failure.

However, his time with Lilly was far from wasted, and his observation of dolphin behaviour convinced him that his double-bind theory did not merely provide a model for the development of schizophrenia, but also offered insight into such phenomena as creativity and humour. “There’s no doubt in my mind”, he said, “that a world without schizophrenia would be a world without humour… a world without art. The three are closely and peculiarly related.” It was also during this time that Bateson first met Alan Watts and the two were to become firm friends. The work of both men would shift in subtle ways as they incorporated one another’s ideas into their worldviews. And although they never directly collaborated, their later work is obviously coloured by their friendship.

By the mid-1960s, arguably aided by his LSD experiences, Gregory Bateson had begun to synthesise his wide experience into a single, coherent position. It would be over-stating things (and a little glib) to describe him as the first ecologist, but it was a trail he helped blaze; the hugely influential book, The Limits to Growth owes a huge debt to his work. Not so much to any particular book or paper, but to the way of looking at the world that he pioneered. And it is this way of looking at the world – this epistemology – to which he devoted the last decade and a half of his life.

Reading his great collection of essays, Steps to an Ecology of Mind is not always a particularly easy task. It covers a vast array of subjects, sometimes with a level of technical depth that the casual reader simply cannot match. It is this – perhaps more than anything – that has prevented Bateson from reaching the kind of mass audience that his ideas deserve. A knowledge of anthropology will serve the reader well for parts of the book, but won’t be much help when Bateson begins discussing the “symmetry and metameric regularity exhibited in the morphology of animals and plants”. And while that may be second-nature to a biologist, they might find themselves wondering what they have to gain from an essay entitled The Cybernetics of “Self”: A Theory of Alcoholism. Or Style, Grace and Information in Primitive Art. His revolutionary ideas redefine such basic concepts as “mind”, “evolution” and “the sacred”. He developed key concepts in a half a dozen different fields. He was a sociologist, philosopher, semiotician and historian as well as biologist, anthropologist, linguist, psychotherapist and cyberneticist.

But for all that, what Bateson is trying to teach us is not a collection of “facts”. Steps to an Ecology of Mind is not primarily a collection of essays on different topics; it is a singular demonstration of why these different topics are, in fact, closely inter-related. He’s not imparting information in the traditional sense. Instead he’s offering an alternative method of thinking about the world. A method rooted in the indigenous cultures he lived with, but tailored to the culture he was hoping to change. So although it’s a word that has since been hijacked by the New Age, Bateson’s underlying message is that the only way we can hope to understand the world around us is by adopting a truly holistic attitude towards it.

When Bateson died in 1980 he was still trying to produce his “instruction manual” for looking at the world. The previous year he published Mind and Nature: A Necessary Unity and two more books were published posthumously. Despite their relative obscurity, they comprise – along with Steps to an Ecology of Mind – a body of work that is the equal of almost any of the great thinkers in history.

In The Future of an Illusion Sigmund Freud wrote:

there are only a few people who can survey human activity in its full compass. Most people have been obliged to restrict themselves to a single, or a few, fields of it. But the less a man knows about the past and the present the more insecure must prove to be his judgement of the future.

It is difficult to think of anyone during the past century who has surveyed more of human activity than Gregory Bateson. He was no dilettante, dipping his toe in several disciplines never reaching far below the surface. He spent his life diving into the deep end and as a result emerged with a near-unique breadth of vision and a rare wisdom. He saw clearly, perhaps sooner than anyone else, the dangerously unsustainable nature of industrial civilisation and identified the root cause for this disastrous course we had taken. He understood that humanity is an integral part of a wider network of systems, an ecology of mind which we are slowly but inexorably driving insane. And although he provides us with no concrete solutions, he does present us with a revolutionary way of looking at the problems. One that might just offer some hope.