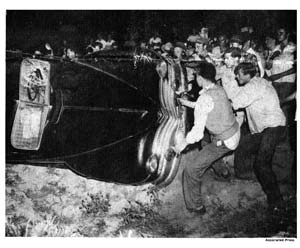 Rioters overturn a car at Peekskill

When I was twelve years old, I discovered that my best friend Liz’s grandmother had, throughout her adult life, enjoyed a decades-long love affair with Paul Robeson. Singer, scholar, Hollywood actor, Broadway star, political activist – Robeson was a worldwide figure, an astonishing phenomenon, and one helluva controversial ‘catch’. Furthermore, my best friend’s grandmother Hazel Dodge was a glamorous blonde, blue-eyed belle with an old-money pedigree. Her Danish ancestors had settled in North Carolina in the 1600s. Summers at the Dodge ranch up in Maine enabled us to uncover slowly Hazel’s adventuresome past – the mild manners of her wealthy husband in notable contrast to those of his eccentric wife. Nevertheless, the news that Hazel had philandered with the gigantic, imposing and very black singer of “Ol’ Man River” was a sensational revelation. Unfortunately, nobody discussed details. Yet. A few years later, I summoned the courage to mention the “Paul Robeson Affair”. Now, Hazel’s response was nonchalant and somewhat bemusing. “Ah, yes. He was something else. You’d have liked him … he was involved in a riot at one of your rock concerts.” And with that, she flamboyantly flung her scarf around her neck like Isadora Duncan and exited the room. I was left to ponder what she could possibly have meant by Robeson’s involvement at one of “my” rock concerts – and, in fact, have only recently figured it out. For it was on this day in 1949 that Paul Robeson was the cause of a serious riot at a genuine proto-rock concert whose line-up included both Pete Seeger and Woody Guthrie. ‘The Peekskill Riots’ left one hundred and fifty people injured, several of them seriously. It was the most serious American grass-roots confrontation of the Cold War era, an ominous foreshadowing of the anti-Communist McCarthy witch-hunts that would dominate throughout the 1950s.

But first a little scene-setting: by 1949, Paul Robeson was slightly past his artistic peak, but, at the age of fifty-one, still at the height of his political activism. At the Paris Peace Conference earlier that year, Robeson had acknowledged that the Soviet Union was the only nation to outlaw race discrimination, remarking: “It is unthinkable that the Negro people of America or elsewhere … would be drawn into war with the Soviet Union.”

This statement was widely reported back home, further inflaming America’s bourgeoning anti-Communist sentiment – and Robeson had said this sort of thing before! Now, his remarks fomented a backlash against the great star in the upstate N.Y. town of Peekskill, where he was scheduled to perform at a Civil Rights benefit that coming August 27th. Situated just thirty miles north of New York City, Peekskill was already a divided community, its wealthy summer visitors and bohemian types causing antagonism amongst working class residents. So when a group of angry local protestors succeeded in cancelling this ‘Commie Shindig’, they were furious when the sponsors – at the behest of Robeson and with the promise of police protection – simply rescheduled the concert for the following weekend.

That 4th September, some 20,000 men, women, and children turned up for Paul Robeson’s performance, the event itself proceeding without incident. However, as the audience was leaving the venue, they were besieged by a violent mob lined up along ten miles of the surrounding roads. Visitors’ cars were overturned, windscreens were smashed, and occupants were dragged out and beaten if they were black or looked Jewish. Folk Music giant Pete Seeger later wrote the song ‘Hold the Line’ about his shock at such an incident occurring in New York’s presumed liberal heartland:

“I had been hit with eggs in North Carolina, Alabama and Mississippi, but this was New York State … We heard about 150 people standing around the gate shout things like ‘Go back to Russia! Kikes! Nigger-lovers!’ It was a typical KKK crowd, without bed-sheets.”

Temporarily caught up in America’s obsessive anti-Communism, even groups of WW2 veterans were heard screaming: “We’re Hitler’s boys — here to finish his job.” Heroically, as the police stood by passively, hundreds of redoubtable concertgoers stonewalled the rednecks by locking arms and singing the anthem “We Shall Not Be Moved”. But Paul Robeson escaped unharmed only by hiding beneath blankets and protected by a seven-car convoy, his name thereafter synonymous with Communism. According to Columbia University’s James P. Shenton, those unfortunate events up at Peekskill “opened up what was to become extensive public endorsement of the prosecution and persecution of so-called Communists.”

The Cold War was firmly in place, and McCarthyism was on its way.