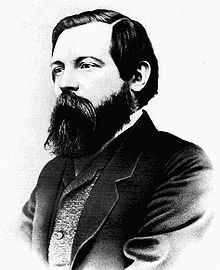 Today we recall the social theorist and world-changer, Friedrich Engels – co-author of The Communist Manifesto and profound contributor to Das Kapital – but chiefly remembered as the lifelong friend, literary executor and “junior partner” of Karl Marx.  At 24, Engels looked set to assume the role of Hegel’s heir apparent with his brilliant and groundbreaking publication The Condition of the Working Class in England. But recognising that his new friend Marx “… stood higher, saw further, and took a wider and quicker view than all the rest of us,” he sacrificed his aspirations to the greater man. Indeed, the most notable aspect of their partnership might be how much Marx depended on Engels’ personal sacrifices and generosity. For twenty years Engels undertook detested work at his father’s Manchester cotton mill in order to facilitate and financially support Marx’s research and writing. He looked after Marx’s children – even claiming the paternity of an illegitimate son. And, for forty years, he contributed ideas, practical examples and editorial direction to the development of the philosophical aspects of Marxism.

While it’s unsurprising that Engels’ legacy should be forever linked to the man he so devotedly served and considered the world’s “greatest living thinker”, having survived Marx by twelve years created more than a bit of posthumous thorniness. During a crucial stage in the growth of the socialist movement, Engels was elevated to primary spokesman for Marxism. He devoted himself to pulling together the chaotic notes Marx left behind for volumes II and III of Das Kapital and, inevitably, there were several significant loose ends which Engels was left to tie up. Sometimes, it is argued, the results were more revolutionary than Marx may have intended – opening up the theory to much more radical interpretations by 20th-century hijacker tyrants Lenin, Stalin, Mao and Pol Pot. Thus, Engels has either been written out, written off or treated like the “whipping boy” – the Saint Paul of Marxism – blamed for the defiled misinterpretations of the prophet. As the political writer Richard N Hunt notes: “It has lately become fashionable in some quarters to treat Engels as the dustbin of Classical Marxism, a convenient receptacle into which can be swept any unsightly oddments of the system, and who can thus also bear the blame for whatever subsequently went awry.”

As Capitalism continues to expose its innate inequality, Marx has been spectacularly resurrected from the post-1989 communist graveyard. Engels, meanwhile, plunges ever deeper into obscurity. As his biographer Tristram Hunt observed, throughout the former Soviet Union, “he is so innocuous his statue isn’t even pulled down.” But as humanity has not in fact reached its final form of government as capitalists prematurely claimed, and we urgently seek alternatives, is not Friedrich Engels – whose 19th-century grasp of global capital resounds today with a terrifyingly accurate prescience – also deserving of a full reappraisal?

2 Responses to 5th August 1895 – the Death of Friedrich Engels