6th August 1945 the Bombing of Hiroshima 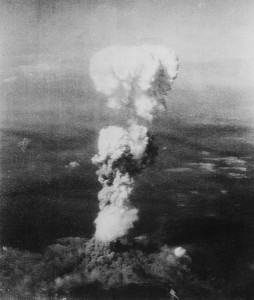 The atomic mushroom cloud over Hiroshima.

On 6th August 1945, the United States government unleashed upon the world the first weapon of mass destruction when the nuclear bomb “Little Boy” was detonated over the Japanese city of Hiroshima. Exploding with a yield equivalent to 12,500 tonnes of TNT, the blast and subsequent thermal wave destroyed nearly 50,000 buildings and annihilated at least 75,000 people. 75,000 more would die as a result of burns and radiation sickness in the next four months.

U.S. President Truman justified this monstrous crime against humanity as a “military necessity”. But the Supreme Commander of the Allied Forces in Europe and future President of the United States, Dwight D. Eisenhower, later put that American myth and national dogma to rest: “Japan was already defeated and dropping the bomb was completely unnecessary.” The bombing of Hiroshima and the even more barbaric repeat performance on Nagasaki just three days later – before the Japanese even had time to understand what had happened – was a disgusting racist act against an enemy perceived as “sub-human” and a hubristic show of strength to the Soviet Union.

In dropping the atom bomb, America chose to conclude WW2 with a bang by letting the world in on the kind of weaponry WW3 would be fought with. This was violent violent violent new technology. And with their B-36 “peacemakers” of the 1950s, America’s nuclear capabilities – advertised with that same un-sane reasonableness as Hiroshima and Nagasaki – would bully the rest of the world for the foreseeable future.

2 Responses to 6th August 1945 – the Bombing of Hiroshima