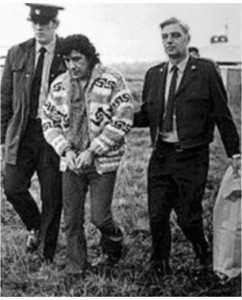 On this day in 1976, leading Native American activist Leonard Peltier was illegally arrested in Canada by means of coerced and fraudulent testimony for the murder of two FBI agents. Extradited to the United States, Peltier was tried and convicted in federal court in what has been one of the most infamous and shameful political miscarriages of justice in modern U.S. history.

The deaths of the FBI agents on 26th June 1975 are described by Peltier’s defense as a battle between American Indian activists defending their treaty rights and the U.S. government’s capitalist interests in the territory. Between May 1973 and June 1975, the desperately poor Pine Ridge reservation in South Dakota – the site of two legendary stand-offs at Wounded Knee and home to some 10,000 Lakota Sioux – had become a cauldron of violence and fear. Sixty American Indians were murdered in that two-year period, 47 of whom – like Peltier – were American Indian Movement (AIM) activists. On that fateful June day, agents Coler and Williams unwisely drove two unmarked cars at top speed through a remote Pine Ridge community in pursuit of an Indian youth alleged to have stolen a pair of cowboy boots. Is it any great surprise these actions were perceived as aggressive by the beleaguered residents? A shoot-out ensued, leaving the two FBI agents and one Native American dead.

Two AIM activists were found not guilty of the agents’ murders by reason of self-defense. Incensed by the verdict, FBI authorities targeted Peltier – already on their notorious COINTELPRO shitlist, which aimed to “neutralize” radical activists by slander, attack, arrest and murder. Fearing no possibility of a fair trial, Peltier sought asylum in Canada. In their relentless determination to extradite him, U.S. authorities manufactured a trio of suspiciously inconsistent affidavits from an Indian woman named Myrtle Poor Bear, who alleged she was Peltier’s girlfriend and saw him commit the murders. Poor Bear later recanted her statements, and confessed they’d been extracted under duress by FBI agents who’d threatened to “put her through a meat grinder” and take away her daughter if she didn’t co-operate. She admitted: “I didn’t even know Leonard; I didn’t know what Leonard looked like till I met him in the courtroom.” The U.S. government now concedes these affidavits were false and fabricated – the extradition was therefore an illegal act. In 1989 the Supreme Court of Canada stated that if the extradition was fraudulent, Peltier should be returned to Canada.

Back on U.S. soil, FBI authorities handpicked a judge and venue to ensure Peltier’s conviction. In a racially predisposed courtroom, prosecutors lied to the judge, ignored court orders, manufactured a ‘murder weapon’ and intentionally hid evidence of Peltier’s innocence. As the Tenth Circuit Court of Appeals has noted, these facts “are not disputed.” Federal prosecutors admitted to not being able to prove that Peltier fired the shots, so they instead constructed a case that he aided and abetted. Peltier was convicted and sentenced to two life terms for pre-meditated murder.

The FBI has been accused by international human rights organisations of instigating violence against the Lakota community prior to the shoot-out and subsequently fabricating evidence. Peltier has been refused a retrial, despite court findings that the FBI withheld evidence that may have exonerated him. Judge Gerald W. Heaney of the United States Court of Appeals for the Eighth Circuit said in 1990 that the decision “continues to trouble” him and that “the FBI had not followed the law in its investigation and it is obvious they haven’t been responsive to the defendant’s request for information.” During a parole hearing in December 1995, U.S. prosecutor Lynn Crooks admitted no evidence exists against Peltier. He further conceded that if Peltier were retried, the government could not re-convict.

Throughout the world, Leonard Peltier – dubbed “the Nelson Mandela of North America” – is considered a political prisoner. With the support of AIM, Amnesty International, global religious and political leaders, as well as over 20 million individuals, Peltier continues to fight not only for personal freedom but for justice for all Native Americans.

In August 2009, Peltier – a 2007 nominee for the Nobel Peace Prize – was once again denied parole. That very same week, the Obama administration pardoned Lynette “Squeaky” Fromme – the convicted attempted assassin of a sitting U.S. President, and former cult member and unrepentant loyal supporter of mass-murderer Charles Manson. There can be only one explanation for Peltier continuing to languish in prison while Fromme went free: America’s inherent policy of racism towards its own indigenous people. February 6th, the date of Peltier’s illegal arrest, is recognised as an international day of solidarity. And so, on this day and every day, we stand united behind Leonard Peltier and beseech Barack Obama to take long overdue action against this gross criminal injustice on behalf of the long-suffering Native Americans. Free Leonard Peltier Now!