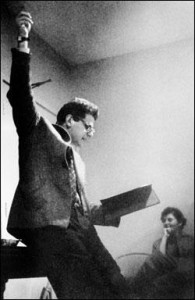 On this day in 1955, a behemoth of incomparable significance occurred that would restore poetry to its rightful cultural position, crystallise the voice of a discontented generation and launch a revolutionary literary movement that set the bar for the explosive 1960s counterculture. Infused with the ancestral spirit of William Blake and politically galvanised by the oppressive climate of America in the grip of the Cold War, six unknown poets joined forces to read to a capacity crowd of about 150 at San Francisco’s Six Gallery – a former auto-repair shop with a dirt floor measuring 20 x 25 feet. The evening, billed as “Six Poets at Six Gallery”, was introduced by Kenneth Rexroth – poet, elder statesman and central figure of San Francisco’s bourgeoning Renaissance – who astutely compared the congregation of artists, politicos and various non-conformists to the Barcelona anarchists of the Spanish Revolution. After a short delay while Jack Kerouac exchanged the donations he’d collected at the door for jugs of cheap red wine to be communally consumed, Philip Lamantia, Philip Whalen and Michael McClure read first and by all accounts read well. But no one could have anticipated what was about to happen next when a nervous twenty-nine-year-old Allen Ginsberg – who had never before read his poetry in public – took his place on the upended fruit crate and hesitantly spoke the line that was about to become as famous and instantly recongisable as “How do I love thee”, “Water, water everywhere” and “By the shores of Gitche Gumee”:

I saw the best minds of my generation destroyed by madness…

As the hitherto forbidden content (drugs, mental illness, religion, homosexuality) emerged, Kerouac – two years prior to On the Road – was the first to realise the magnitude of what was happening. Sitting on the side of the low stage, he began to punctuate Ginsberg’s Whitmanesque-meets-jazz rhythms by banging his empty wine jug and, at the end of each long line, shouting “GO!” Soon, the entire audience joined in… their encouraging chants of “GO! GO! GO!” driving Ginsberg to a shamanic momentum and creating a tribal unity between audience and poet. By the time he finished, Ginsberg was in tears. So was Rexroth. Everyone in the room knew they’d witnessed a rare moment of duende – that mysterious higher state brought on by a burst of genuine inspiration  – and henceforth nothing would be the same again.

Michael McClure would later recall: “We had gone beyond a point of no return, and we were ready for it. None of us wanted to go back to the gray, chill, militaristic silence, to the intellective void – to the land without poetry – to the spiritual drabness. We wanted to make it new and we wanted to invent it and the process of it as we went into it.  We wanted voice and we wanted vision.”

The next day, Lawrence Ferlinghetti, who’d been in the audience, sent Ginsberg a telegram. With a nod to the past but with his eye firmly fixed on the future, he borrowed Ralph Waldo Emerson’s legendary words to Walt Whitman in 1855: “I greet you at the beginning of a great career.” The fledgling publisher then added, “When do I get the manuscript?”

The publication of “Howl” is another story… but, on October 7th 1955 and on the occasion of its first reading, a battle cry was sounded, and the Beat Generation was born.