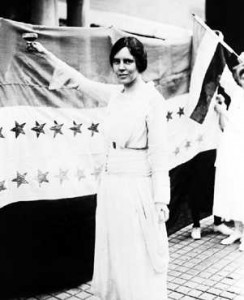 At the onset of the second decade of the twentieth century, the American women’s suffrage movement was floundering. Despite non-stop crusading since 1848 and the monumental efforts of pioneers such as Susan B. Anthony and Elizabeth Cady Stanton, by 1910 only four states had enfranchised women. The movement was in desperate need of new impetus. Today we recall the extraordinary woman who led the final charge for the vote with a militance hitherto unseen in America – Alice Paul.

Like many of the younger first-wave feminists, Alice Paul had grown impatient with the longstanding state-by-state strategy. At 29, Alice instigated a campaign dedicated to the passage of a constitutional amendment for women’s suffrage and went head-to-head with the federal government and President Woodrow Wilson. She played a pivotal role in bringing about the passage of the 19th amendment in 1919, but what this decisive moment in America’s development owes to Alice Paul’s militancy is often criminally overlooked because history has adopted a less controversial narrative of the women’s suffrage movement.

Born into a strict Quaker family, Alice Paul was raised to believe in the righteousness of social equality. In 1907, while studying in the UK, her peaceable worldview came to an abrupt end after witnessing a riot when a female attempted a public speech about women’s suffrage. That woman was Christabel Pankhurst – eldest daughter of the legendary militant suffragist Emmeline. The newly radicalised Alice abandoned her studies to join the Pankhursts in their struggle, and was sent to English prisons on three occasions where she endured hunger strikes and painful force-feeding.

Three years later, Alice returned home and became an overnight star in the American suffrage movement. The National American Woman Suffrage Association (NAWSA) appointed her chair of its new Congressional Committee, whereupon she wasted no time in introducing her bold tactics in accordance with the Pankhurst credo of “deeds not words”.

Alice understood that for a federal campaign to succeed, it needed to have the support of the president. She got his full attention when she staged a suffrage procession of some 8000 strong in Washington D.C. on the eve of Woodrow Wilson’s 1913 inauguration. Though Alice had done her part to organise a peaceful march, an unruly crowd assaulted the suffragists while police stood by and did nothing. The next day, Alice Paul stole Wilson’s inaugural thunder when news of the near-riot made headlines. Over the next four years, she would become one of the prickliest thorns in the president’s side.

By 1914, the increasingly militant Alice Paul was expelled from NAWSA for being “too British”. Along with her great ally Lucy Burns, Alice formed a newly independent Congressional Union for Woman Suffrage, later renamed the National Woman’s Party (NWP). Without the resistance from the more measured NAWSA, Alice was free to be unapologetically aggressive. In January 1917, on the eve of America’s involvement in the First World War, the NWP stationed members in front of the White House. No American – male or female – had ever before conceived of this now time-honoured protest tactic. Alice Paul was the first.

The NWP’s so-called “Silent Sentinels” picketed the president’s residence for 18 months, 6 days a week, 8 hours a day. But when Alice unveiled her banner indicting “Kaiser Wilson” for hypocrisy in fighting an overseas war for democracy while 20,000,000 American women remained disenfranchised, the president finally lost his patience.

An indignant public lost its patience too. A group of patriotic soldiers tore the “treacherous” banners to shreds and violently attacked the female picketers. Instead of arresting the attackers, the police arrested the women for “obstructing traffic”. 168 suffragists were sent to jail – most of them to a former men’s prison with male guards and open toilets, rotten food and dirty sheets. In an attempt to discredit Alice Paul, she was declared insane and placed in a psychiatric prison. Demanding to be recognised as political prisoners, Alice and many others went on hunger strike and were subsequently subjected to brutal forced-feedings. Then, on 15th November 1917, some forty guards with clubs went on a rampage, terrorising thirty-three jailed suffragists. They beat, grabbed, dragged, choked, slammed, pinched, twisted, and kicked the defenceless women.

News of the so-called “Night of Terror” leaked out to newspapers, causing public outrage. The militants’ stubborn protests, however reviled they may have been, created a situation in which something had to be done. In January 1918, Woodrow Wilson publicly announced his support of woman suffrage. Two years later, the 19th amendment was finally ratified. Alice Paul’s militancy had worked.

For Alice Paul, however, the struggle did not end with the right to vote, which did not fully correct the fact that women were discriminated against: “The ballot is the symbol of a new status in human society, it is the greatest possible single step forward in the progress of women, but it does not in itself complete their freedom.” In 1923, Alice Paul drafted the Equal Rights Amendment – the final step in women’s struggle for full legal equality.

When Alice Paul died on 9th July 1977 aged 92 at her home New Jersey, she was convinced that organisers would be successful in securing the remaining three states needed to ratify the Equal Rights Amendment that she’d introduced to Congress fifty-four long years earlier. The amendment, however, was yet again defeated.

A reinvigorated movement to once and for all secure constitutional equal rights for American women still awaits. It will require a new generation of courageous feminists who have not been hoodwinked by patriarchal concessions. The wrongs throughout society cannot even begin to be righted without equality. And so, on this anniversary of her passing, we bow our heads in gratitude to Alice Paul and beseech women of today and tomorrow to follow in her noble footsteps.