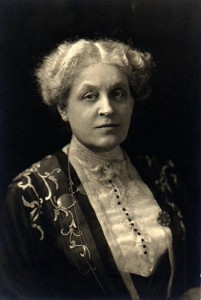 When Susan B. Anthony and Elizabeth Cady Stanton first drafted the 19th Amendment in 1878, never could they have imagined it would be another forty-two gruelling years before American women would win the right to vote. Why, even black men had won their seemingly impossible battle for suffrage in 1870. But by the time the 19th Amendment was finally ratified in 1920, Susan B. Anthony and Elizabeth Cady Stanton were long dead. So too were all those other extraordinary heroines whose names are forever associated with their cause: Lucy Stone, Lucretia Mott, Julia Ward Howe, Matilda Joslyn Gage. By the outbreak of World War I, the American women’s suffrage movement was fractured and unfocussed – no doubt dismayed and disillusioned by its long, fruitless struggle. So who led the final charge?

Today we celebrate the determined and savvy suffragist Carrie Chapman Catt – who, as president of the National American Woman Suffrage Association, revitalised the flagging movement and provided the organisation with its first coherent strategy for securing the vote. To succeed, she argued, NAWSA had to focus on the passage of a federal suffrage amendment in addition to its longstanding state-by-state policy. Carrie Chapman Catt’s inspired “Winning Plan”, as it came to be known, transformed her weary sisters into a highly effective lobbying ‘army’ that would eventually win over the president, House and Senate.

Carrie Chapman Catt’s journey to 19th Amendment glory began in 1872 when she was 13 years old. Asking why her mother was not accompanying her father to vote, she was disgusted when told that voting was far too important to entrust to women. Her struggle for women’s rights began that moment. With a steely determination and in defiance of a father who refused to support her, Carrie put herself through college – finishing first in her all-male class. She began her work for suffrage in 1887. A powerful speaker, it didn’t take long for her to gain notice; just three years later, Susan B. Anthony herself chose Carrie to succeed her as president of NAWSA.

“We who have come down from the last generation are reformers; but reformers are poor politicians,” said Carrie. Under her dynamic leadership, however, that was about to change. Carrie set out her vision, and re-deployed NAWSA’s members from agitators to political lobbyists. With the tide turning in their favour as women demonstrated their mettle at home and abroad in WWI, Catt spearheaded an avalanche of pressure on Washington that would prove triumphant.

Carrie Chapman Catt’s contributions have often been overlooked by subsequent generations of feminists who instead venerate the militant Alice Paul. But it was Paul’s militancy that pushed Woodrow Wilson towards Catt, who won the president over with her well-to-do manners and respect for authority. But winning over the president was no small act – Wilson had once called woman suffrage “the foundation of every evil in this country.” That Wilson eventually threw himself behind the drive to win women the vote – he personally lobbied the House and pleaded with the Senate – can be credited much to Carrie Chapman Catt’s shrewdness.

In 1912, a pessimistic Catt – aged 52 and battle-weary – wrote to a friend that maybe some day a woman would rise up and lead her sisters to suffrage victory. “Perhaps she is growing up now,” she mused. But women wouldn’t have to wait yet another generation for their future leader. The woman Carrie Chapman Catt envisioned turned out to be herself, after all.