9th November 1989  the Collapse of the Berlin Wall 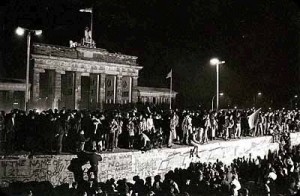 Celebrations as the Berlin Wall falls

Today we remember the anniversary of the collapse of the Berlin Wall – that 90-mile-long boundary separating two opposing ideologies, that divided a city in half completely cutting off the political enclave of West Berlin from surrounding East Germany. Ever since its sudden and covert construction in the dead of night in August 1961, the Berlin Wall came to represent the most potent and hated symbol of the Cold War – a literal, physical Iron Curtain between Western democracy and Soviet communism. Its collapse, however, was even more unexpected than its erection – and it happened not because of any great or decisive Western victory but, astonishingly, due to a slip of the tongue…

Since taking over as the head of the USSR in 1985, Mikhail Gorbachev’s policies of economic reform and ‘openness’ had led to a loosening of the Soviet Union’s hitherto inflexible grip on the Eastern blok. By the autumn of 1989, Armenia, the Baltic states and Poland had staged rebellions which, remarkably, had not been crushed by Russian tanks. Most significantly, Hungary adopted a multi-party system and opened its border with Austria – providing the first gateway to the West for over 40 years. Amidst growing unrest in the German Democratic Republic, over 13,000 East Germans fled to the West via Hungary in just three days in September 1989. The GDR Politburo, in a desperate attempt to halt the exodus, forced the resignation of their long-serving leader Erich Honecker and installed Egon Krens. Krens introduced minor concessions – including amnesty for those who had been caught attempting to escape – but the unrest continued and the refugees still fled.

Then, without fanfare, the GDR Central Committee called a press conference at 7.00pm on 9th November. For nearly an hour, the First Secretary – Günter Schabowski – droned on about potential reforms. As he concluded, an Italian journalist asked about the right of East Germans to travel. Schabowski replied: “Today as far as I know a decision has been made. We have decided to adopt a regulation which enables every citizen of the GDR to leave the country by way of the GDR border crossings.” The stunned reporters weren’t sure that they’d heard correctly. The Italian journalist asked when this reform would come into effect. Schabowski fumbled with his notes for several moments before responding, “As far as I know, immediately.”

The historic announcement was immediately broadcast to the world. But what no one yet knew was that Schabowski had spectacularly botched it. The reform, hastily conceived earlier that day, was meant to contain several restrictions – including the requirement of a special visa – and, most significantly, border personnel were to have been consulted and thoroughly briefed before implementation. This extraordinary blunder, however, once released could not be contained. The dam had burst. Within moments of the announcement, East Berliners converged in droves on the Wall’s checkpoints. The surprised and overwhelmed border guards refused to let anyone pass until they received orders – but none came through. Egon Krens debated through the night how to rectify Schabowski’s gaffe: send in the tanks, or open the borders. In the end, the choice was made for him. Fearful of riots erupting as the crowds mounted, the border guards gave in to the will of the people and let them through. Tens of thousands of East Berliners surged through the crossings and, by 3am, jubilant citizens from both sides were hammering away at the Wall. Events had moved so swiftly that the Kremlin awoke to a fait accompli; there was little Gorbachev could do except congratulate Krens for his restraint.

A hole in the Wall had literally and figuratively been punched. It signalled the decisive turning point in the Cold War and triggered the end of the seemingly omnipotent Soviet Union. More governments fell from power between 1989-90 than at any time in Europe since the end of World War I and, before that, 1848, as the grotesque bastardisation of Marxism collapsed like a house of cards.

And freedom lovers everywhere will never forget those moving scenes of jubilation as Berliners tore down the Wall of oppression and danced atop the Brandenburg Gate – liberated at last from the ruthless tyranny of an ideology gone horrifically wrong.