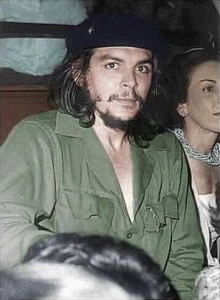 On this day in 1967, the CIA had Ernesto ‘Che’ Guevara murdered in the jungles of Bolivia – the heroic exploits of this Latin American Warrior Poet and future World Prophet having, again & again, rendered the US Government’s many undercover agencies trousers-down before the world’s press: for the United States of America in its preferred post-war role as a brand new and gleaming neo-Roman Empire, this situation would not be tolerated. Che had long been a thorn in the US Government’s pride; his success in the Cuban Revolution as Fidel Castro’s dashing Generalissimo providing this brilliant cigar-chomping longhair the opportunity to curse the imperialist and racist policies of his American political counterparts right-up-close at meetings of the United Nations throughout the late-50s. And what a fabulous figure Che Guevara cut among all those middle-aged grey-suited WASP greedheads, as he ripped into South Africa for its vile and sickening Apartheid Policies; and as womankind swooned collectively, every male in the non-White World over 8-years-old grew 3 inches, inhaled vigorously and noted a new role model. However, in 1965, it was Che’s extraordinary decision to eschew the safety of politics and World Celebrity in favour of a return to waging Revolutionary War. This action would prove to be the undoing of Che Guevara – for even he could not recognise the CIA’s deep psychological need to avenge all of the American government’s public humiliations. As former CIA agent Philip Agee later commented:

“There was no person more feared by the company [the CIA].”

Che first set his sights on the Congo Crisis, where – throughout 1965 – his movements were constantly monitored by the CIA. Moreover, he immediately broke one of his own premier rules of guerrilla warfare by knowing little of either the territory OR the local language. Commencing his Congolese journal: “This is the history of a failure”, Che next turned his attention to Bolivia, where a CIA Special Activities group monitored his movements and coached the Bolivian Army in guerrilla warfare. And when Che’s band was encircled by 1800 Special Forces troops, he was taken to a local schoolhouse and shot dead. Like that other great bête-noire of White Society Lenny Bruce, Che’s broken and martyred body was then displayed to an unbelieving world, his beard and long hair lending his photographs an altogether Christ-like air.

But let us now remember Che for his incredible successes, his audacity, his persistence, his incorruptibility and his refusal ever to rest upon his past works. I’ll conclude this tribute with my favourite quote from Fidel Castro’s call-to-action reproduced in Che’s classic book Guerrilla Warfare:

“It is not for revolutionaries to sit in the doorways of their houses waiting for the corpse of imperialism to pass by.”

2 Responses to 9th October 1967 – The Martyrdom of Che Guevara